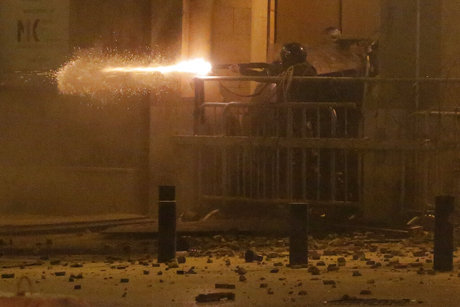 In a statement, the State Security agency said the U.S. citizen was at the scene of the protest near the parliament building, a location from which someone was broadcasting live to the Israeli paper.

The area outside Parliament was packed with journalists, many of them correspondents for international news agencies. International coverage of the three-month old protests in Lebanon has picked up in the past two days as the violence worsened.

An eyewitness, speaking on condition of anonymity fearing reprisals, said the young man was taken away by men dressed in black who put him in a civilian car and drove away.

Media reports meanwhile said the American journalist was not the one broadcasting to Haaretz and that the Israeli daily’s website was using footage from the Reuters news agency.

Journalists are the 4th power.... ya dimdim.

So, like the 15+ Million expats around the world out there, I'm one of them. I was at work and a nice young and very beautiful Iranian lady co-worker asked me were I was from. I told her Lebanon, she replied "our government (iran) gives so much money to you guys and we starve" I really don't like Lebanese! Ufff, I said, All of us??? she said ya...

I smiled and asked her so 'Iran gives a Lot to Hizballah, she said yes and most Iranians hate them... all they do is take our money. I told her I agree with you but don't hate all Lebanese as most of us are not Hizballah, Most of us are like you.. Muslims, Christians, Druze, etc...I told her Hizballah is a criminal group in the eyes of most Lebanese who even oppress their own people, a lot. They are Not Lebanese to most of us Lebanese. My point is, this is a view point in Iran that is quite prevalent. This girl told me this several years ago and actually is quite refreshing to hear it so often now from them... GOOD! You see its not a problems with any sect but is a problem with Mafia and EVIL groups hijacking all of us!!! Mystic you PURE brainwashed EVIL little. Really Mystic start understanding your future is doomed if you keep believing the lies your fed!!!