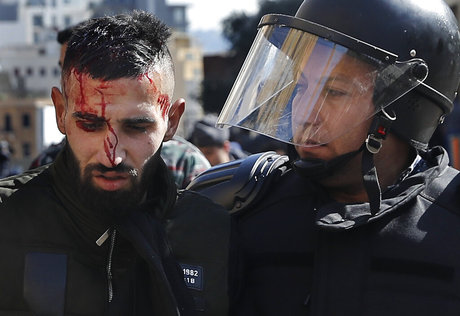 Security forces clashed with protesters in downtown Beirut on Monday, leaving several demonstrators injured and others detained. As the protests simmered outside parliament, lawmakers held a controversial session to discuss and later approve the state budget amid a crippling financial crisis.

Hundreds of soldiers, including special forces, as well as riot policemen were deployed on major roads in the capital and its suburbs. They had sealed off the zone leading to parliament to prevent protesters from barricading the lawmakers' path. The protesters had in turn blocked roads further afield in an effort to stop lawmakers from reaching the building, but security forces managed to keep a single road open.

Lebanon's protest movement broke out on Oct. 17 over government plans to impose new taxes. Protest organizers say the movement will not accept anything less that the resignation of the ruling elite. Those elites have run the country since the end of the 1975-90 civil war, and protesters blame them for widespread corruption and mismanagement. The protesters have rejected the new 20-member government of Prime Minister Hassan Diab, which was announced last week.

At one point, Monday's rallies turned violent as protesters removed barbed wire from a road leading to parliament and were chased by riot policemen, who beat them with clubs. The protesters threw stones at the police, who detained about a dozen of them.

The Lebanese Red Cross said at least 27 people were injured, including eight who were taken to hospitals. Over the past two weeks, downtown Beirut witnessed riots that left more than 500 civilians and policemen injured.

The 2020 budget, which was later approved in the session with only 49 out of 128 votes, was drafted by the government of former Prime Minister Saad Hariri, who resigned in late October in response to the nationwide protests.

The tight security measures underscored lawmakers' determination to hold the budget session. In November, thousands of protesters closed roads leading to parliament, forcing a postponement of a legislative session after most lawmakers weren't able to reach the legislature.

Protesters, and some politicians, have described the budget session as illegitimate and unconstitutional. They say the prime minister's new government has no right to attend and discuss the budget before it wins parliament's vote of confidence. Moreover, the budget being discussed was drafted by the previous government under Hariri, which resigned amid pressure from the street.

Shortly before noon, more than half the 128-member parliament were present, giving the needed quorum for the session to begin. The Lebanese Forces, the Kataeb Party and a number of independent MPs boycotted the session.

Diab attended the parliament session without any other member of his Cabinet. When pressed by members of Hariri's bloc whether he will adopt the budget drafted by the former Cabinet, Diab said: "Had we not adopted the budget we wouldn't have come today."

In recent days, security forces set up concrete blast walls around parliament and the nearby government headquarters, known as the Grand Serail, to keep protesters from reaching them.

The national currency, which has been pegged to the dollar since 1997, lost about 60% of its value in recent weeks, raising alarms among many Lebanese who have been losing their purchase power.

The former government had hopes to bring down the budget deficit to 7.6% of the GDP in 2019 year and to 6.5% in 2020. With the financial crisis worsening since the protests began, it is appearing more difficult to bring down the deficit.

Legislator Salim Saadeh listed Lebanon's financial and economic problems, ranging from the massive debt to the drop in the local currency.

"We are like someone drowning in mud but at the same time standing in front of a mirror and brushing his teeth," Saadeh said