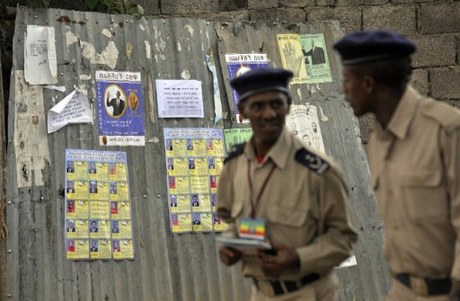 Ethiopia said Wednesday that five tourists killed in an attack blamed on terrorists in the northeast were all European, and that two other foreigners in the group had been kidnapped.

The government confirmed the attack, first reported by state television late on Tuesday, and blamed terrorists backed by its arch-foe neighbor Eritrea.

"Terrorist groups trained and armed by the Eritrean government crossed the border and attacked them and the assailants have gone back," government spokesman Bereket Simon told Agence France Presse.

"They killed five, wounded two and kidnapped four, out of which two foreigners, one police and one driver," Bereket Simon said.

Simon earlier said those killed were a German, a Belgian, an Italian, a Hungarian and an Austrian.

He did not give the nationalities of those wounded or abducted.

State television said the wounded had been taken to hospital by government forces in the region.

The attack occurred Monday in the remote Afar region near Ethiopia's border with Eritrea. The group was visiting the Erta Ale volcanic site.

A German foreign ministry official said they were probing reports that German nationals could have been victims of the attack.

"Reports of an attack on tourist group with German citizens in Ethiopia are being followed up. The German foreign ministry and the German embassy are working with determination to clarify the matter and the fate of the German citizens," the officials said on phone from Berlin.

The official said the tourists were travelling in the same group.

The Afar region, an inhospitable scrubland and desert with shallow salty lakes and chains of volcanoes, is reputed to be one of the hottest places on Earth. It also known for hominid fossil finds.

"It has become the modus operandi of the Ethiopian government to blame Eritrea for anything happening inside Ethiopia," Asmara's representative to the African Union, Girma Asmerom said.

The rival Horn of African countries fought a bitter territorial war between 1998 and 2000 and are still deeply at odds over their border.