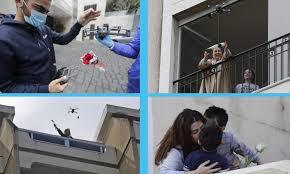 In a quiet Lebanese town under lockdown over the novel coronavirus, a drone buzzed towards a balcony on Saturday to deliver a red rose to a mother grinning in surprise.

The COVID-19 pandemic may have put a damper on Mother's Day in Lebanon this year, but three students have come up with a new service to celebrate the occasion without flouting social distancing restrictions.

Down in the street in the coastal town of Jounieh, 18-year-old Christopher Ibrahim texts a teenager who has ordered a flower drop-off for his mother, asking him to bring the family onto the balcony.

He slips a single rose in a ring hanging under the aircraft and it lifts off into the air to carry the flower to its intended recipient.

For almost a week, most Lebanese have been ordered to remain at home to stem the spread of COVID-19. The airport has closed and all non-essential businesses have been told to shutter.

Lebanon has recorded 206 cases of the novel coronavirus so far, and counted four deaths.

"I wanted to think of something that would enable people make their mothers happy in the safest way -- without there being contact with anyone," Ibrahim said.

Ibrahim, who has filmed weddings using a drone and also volunteers for the Lebanese Red Cross, decided on the idea of an airborne rose.

"I thought if it was delivered by drone, there would be zero contact," he said.

But beyond cheering up mothers in lockdown, Ibrahim says the unconventional flower delivery service also aims to support medical workers battling the pandemic.

"Everything we make from this project will go to the Red Cross," he said. Each rose delivery costs between 10,000 and 20,000 Lebanese pounds ($6.60-$13 according to the official exchange rate) depending on the location.

Lebanese officials fear an increase in COVID-19 cases would overwhelm local hospitals, in a country already reeling from an economic crisis and mass anti-government protests.

Lebanon has been largely quiet in recent days, although food stores have remained open and there have been some vehicles in the streets.

Ministers and lawmakers have called for a full curfew, and Prime Minister Hassan Diab said the army and security forces would be stricter in enforcing the lockdown and so-called state of "general mobilization."

An estimated 900 million people are now confined to their homes in 35 countries around the world -- two thirds by government lockdown orders, according to an AFP tally.