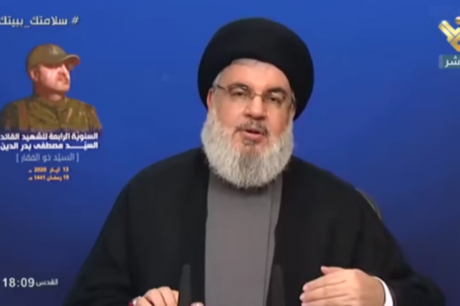 Hizbullah chief Sayyed Hassan Nasrallah on Wednesday said the Lebanese government must cooperate with its Syrian counterpart if it wants to put an end to cross-border smuggling.

“No one can deny that there is cross-border smuggling between Lebanon and Syria, and I'm not talking about the fighters or arms of the resistance,” said Nasrallah in a televised address commemorating slain Hizbullah military commander Mustafa Badreddine.

“Cooperation between the two countries, governments and armies is necessary to halt the smuggling,” he stressed.

Criticizing “talk of U.N. forces on the Lebanese-Syrian border” as unacceptable, Nasrallah said such calls aim to “achieve the objectives of the July war.”

He also warned that “delaying the arrangement of Lebanon's ties with Syria entails a loss for Lebanon” amid its worst financial and economic crisis since the civil war.

Separately, Nasrallah described Israeli air strikes in Syria -- where his group and Tehran are backing the Damascus regime -- as an "imaginary battle" against Iranian troops.

"In Syria there is an imaginary battle that Israel is waging, called 'not allowing the presence of Iranian military troops in Syria,'" he said, insisting that only "Iranian military advisers and experts," not troops, are there.

Nasrallah, however, mentioned "an exceptional case," when he said for two or three months Iranian troops took part in the battle for the northern city of Aleppo.

The Damascus regime expelled rebels from the city in late 2016 in a major blow to the armed opposition.

“I advise the Israeli public not to listen to the lies of their leaders about the situation in Syria,” Nasrallah added.

Noting that the withdrawal of Hizbullah and other fighters from some areas in Syria has nothing to do with the Israeli strikes, Hizbullah's leader said “Israel in Syria is scared and worried.”

“Israel is still fighting some battles in Syria but it has lost the war,” he emphasized.

Pointing out that Israel “has been strongly involved in the war in Syria since 2011,” Nasrallah announced that “Syria has survived the fragmentation attempt.”

“Today we can say that Syria has triumphed in this war,” he boasted.

Nasrallah, however, conceded that Israel was attacking targets "linked to missile production in Syria," saying Israel fears that the manufacturing of "precision missiles" could spell "new dangers" for it.

Nasrallah also denied Iran and its allies are in a battle for influence with Russia in the neighboring country and said their chief aim was "preventing Syria from falling under the hegemony of America and Israel."

Israel has carried out hundreds of air strikes in Syria since the start of the civil war in 2011.

They have targeted Syrian troops as well as allied Hizbullah fighters and Iranian targets, according to monitoring group the Syrian Observatory for Human Rights.

"They view the presence of Iran and resistance groups as a threat" against Israel in the future, Nasrallah said.

If Israel stops blowing stuff up, its citizens start to think it is not playing the game right. Israelis are big sports fans. That's why they're so obese. But they're careful in their statistics keeping. They don't blow up anything important, which would make NATO take away their fire crackers.

He broke a new record! I think that every single sentence is a lie. Unbelievable...

95% of his speech is about foreign countries.... this guy is only Lebanese on his ID.

You stupid woman! Its nothing Israel wants more than impotent rulers like the Assads in Syria, whos hasnt had one shot at Golan since Israel took over in 1967. That means that Israel can concentrate on picking out headless Hezbolla and Iran chickens every now and then, killing them for fun...

Lol--he has failed as an economics, medical, and financial expert and now he is trying to con us into improving relations with Syria, WHICH JUST WAS IN THE NEWS FOR HAVING FUEL AND WHEAT SMUGGLED INTO IT?

Why doesn't he get his minions to stop doing this instead?

It does whatever it pleases to do.... thanks to Clown and this devil Lebanon is back in Syrias hands. Israel is fine with that as Kizb keeps the border safe for Israel.

Lebanon is either part of (democratic) Syria or it is a French colony. Are you afraid Mamma France doens't want you anymore?

You`re losing it, Chris. Have you tried Valium?