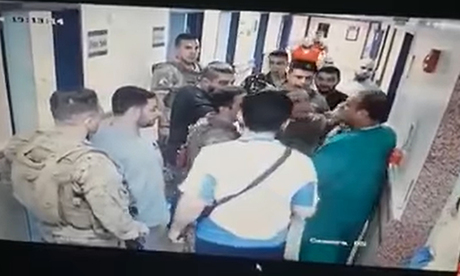 A video showing Lebanese soldiers striking a doctor inside a hospital in the northern city of Tripoli stirred a social media uproar Wednesday and led to the arrest of the troops.

The footage was captured by CCTV late Tuesday after a man was brought to the city's Dar al-Shifaa hospital with a bullet wound following clashes between two families.

The video, which spread like bushfire on Lebanese social media, shows one soldier smacking an ER doctor in the face. Another soldier then shoves him in the back.

"Doctors are human saviors and this is how they're protected?," wrote Tamara Rasamny on Instagram, in just one of hundreds of indignant reactions to flood social media.

Selim Abi Saleh, who heads Tripoli's physicians union, said the attacked doctor was trying to keep the soldiers from interrogating two patients receiving urgent medical care: one was bleeding from a gunshot wound and the other was unconscious.

"We denounce this, specially at this time when doctors are doing their utmost to defend the citizen's health and then they get attacked by the security forces who are supposed to be supporting them," Abi Saleh, told a local radio station.

Abi Saleh told The Associated Press the incident was an "unprecedented and surprising" attack from the army against a doctor who was only doing his duty. He denounced it as "excessive use of force" and said that disciplinary action was not enough but that the soldiers should face a court martial.

The army described the incident as an "individual act" and said two soldiers were detained and an investigation was underway. Its statement said "the army command regrets the incident" and reiterated its respect for doctors and their work.

Lebanese authorities have reported over 950 cases of coronavirus, including 26 deaths. Following a reduction in infections, a recent jump in cases has caused renewed concerns.

Tripoli, Lebanon's second largest city and its most impoverished, has seen clashes between the army and anti-government protesters in recent months as the country grapples with an unprecedented economic and financial crisis. One Tripoli protester was killed when troops opened fire to disperse a rowdy demonstration late last month. Human Rights Watch said the Lebanese military "unjustifiably used excessive, including lethal, force against protesters" in that incident.

God bless the Lebanese Army aka Hezbollah for protecting our medical staff during the Corona Virus pandemic.

Reality is the army should be at borders with israel and syria protecting us from smugglers, illegal arms, militias and aggression. Unfortunately it was turned into an internal security force thanks but no thanks to hizballah and aoun.

A disgusting group of thugs who did not even finish elementary school beat up an ER doctor who is saving lives!

It is true Code 61... there are good people everywhere... and plenty of very good men in the army.
But the army is NOT what many people claim it to be.
Strong, impartial, right, uncorrupted...
No. The army is divided, weak, infiltrated, and might fall apart exactly the same way this country did.
It is full of flaws, weaknesses, and divisions. It has no prestige, it is poor, and underpaid. A cumbling institution filled with ebola entities...

This is the true culture of the army: arrogant, corrupt, and uneducated.

Hopefully they will contract the corona virus and the doctor will be the person in charge of putting them on a ventilator!