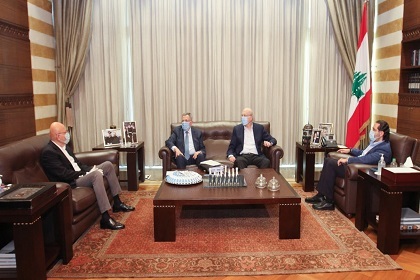 Former premiers Saad Hariri, Najib Miqati, Fouad Saniora and Tammam Salam on Wednesday deplored what they called “the remarks against the Taef Accord,” in an apparent response to the recent statement of Shiite mufti Sheikh Ahmed Qabalan, the son of Higher Islamic Shiite Council chief Sheikh Abdul Amir Qabalan.

“The National Pact and the Document of National Accord are an honest, rational and enlightened reflection of the deep-rooted relation between Christians and Muslims, which is based on the nobleness of the unifying idea of coexistence,” the ex-PMs said in statement.

“In this regard, the ex-PMs condemn the remarks that have targeted the Taef Accord, which has become the constitution of the Second Republic and which oversees Lebanon's formula and existence,” they added.

“These dangerous remarks at this historic moment, whether in terms of abolishing (the Lebanese) entity or going to federalism, represent a threat to Lebanese national security,” the ex-PMs cautioned.

They also called for “exerting efforts to strengthen the authority, credibility and full sovereignty of the Lebanese state over its entire territory and institutions instead of weakening it or disavowing its major national experience.”

Qabalan had on Sunday announced that Lebanon's 1943 National Pact has “expired.”

A Proper Headline would be:"The Meeting of Losers" This squad of Corrupts should waste their time trying to find another source of Gain! Oh sorry I forgot, they only master the art of robbery!

They should explain why they support the Christian privilege of retaining half the seats in the Chamber of Deputies regardless of vote totals. Such support is an attack on their fellow Muslims and themselves.
I think those former premiers are only saying this now because they feel they are losing the mass support of Lebanese Sunnis. As if this would help that. Reminding the slaves to not rattle their chains too loudly.

lol @ the shia christian from europe with triple nationality

Well, no one can deny what he said is a lie, what interests me more is what he didn’t say, he’s part of the problem, he’s a son of corruption . His sect bankrupted the country by scaring off foreign investors, his sect smuggles in and out of Lebanon products worth billions of dollars every year and finally yes, all the others stole us march 8 and march 14 alike. Not to mention the other sectarian leaders benefiting directly from the thefts, the grand mufti and the cardinal-patriarch.

they all cling to the taef accord but when it comes to the article stipulating the end of sectarianism they all seem to have forgotten it.... they are more sectarian than ever with the help of their sheep....