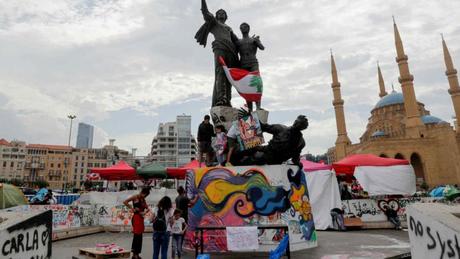 Hundreds of protesters from the south to the north of Lebanon joined the main demo in Martyr’s Square in Beirut on Saturday against the country’s political elite, corruption and a crumbling economy as the result of decades of mismanagement.

Beirut’s central public square that saw the launch of the October 17 uprising, saw different groups of protesters with many different demands.

Some groups will call for early parliamentary elections, others will protest against the country’s dire economic conditions that pushed many into poverty and others against the illegal arms of Hizbullah, demanding implementation of UN Resolution 1559.

However, some believe the timing is suspicious to call for Hizbullah's disarmament, noting that it aims to foil the main goal of the protests.

Hizbullah supporters and allies believe the protests aim to topple the ruling authority.

Scattered groups of protesters arrived in the capital's downtown area, only some of them wearing masks and face shields to protect against the spread of the coronavirus, in response to calls for a centralized protest to press for demands. But tensions and divisions among protesters were clear.

Crowds started flocking into Martyr’s Square. Face masks were distributed to protesters as the demos kicked off in light of the COVID-19 coronavirus outbreak.

In recent weeks, the Lebanese pound, pegged to the dollar for more than two decades, has lost 60% of its value against the dollar and prices of basic goods soared. Unemployment has risen to 35% and an estimated 45% of the country’s population is now below the poverty line.

The government has gradually begun easing a lockdown aimed at curbing the virus, and protesters have returned to the streets in small numbers in recent days. Saturday's protest was called for by grassroots organizations and civil society groups as well as several political parties, including some groups who have introduced demands for the militant group Hezbollah to disarm.

The participation of political groups and anti-Hezbollah slogans have upset some activists and protesters who say the focus should remain on addressing the country's economic crisis and calling for early elections.

Hundreds of Lebanese soldiers and riot policemen were deployed on major roads in the capital and its suburbs ahead of the protest. They later stood between various groups amid minor scuffles and stone-throwing incidents.

Shoot them all with tear gas let them return home. Useless property destructions.

The problem is that the politicians, Berri and co, hired 300,000 useless civil servants who will vote for them again and again since their livelyhood depends on them.

The private sector was working double to pay the wages of these civil servants, mist if them being parasites. But when the parasite's salaries were increased courtesy of Berri, in 2017, the private sector couldnt support them anymore and the economy buckled.

The private sector is the victim of these parasites who cannot even protect us from israel, assad or hezbollah, (some army folks are heroes- I am talking abt the majority)
And are real arrogant a..holes each time we do a transaction with the government.

These parasites and the political class feed each other, and will not go anywhere. Lebanon is doomed.

I would agree with you if I hadn't noticed that you are a frustrated supporter of Almustaqbal Gang that are part of that system you come here now to criticize!