Clashes, Tear Gas in Beirut as Protests Turn to Riots 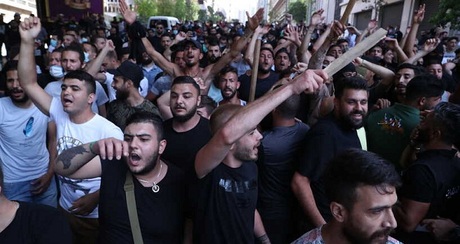 A few thousand demonstrators had gathered in Martyrs' Square hoping to reboot nationwide protests that began late last year amid an unprecedented economic and financial crisis. But tensions and divisions among protesters over the goals of the demonstration quickly became apparent as groups of protesters faced off, with the army standing between them.

Scattered groups of protesters arrived in the capital's downtown area, only some of them wearing masks and face shields to protect against the spread of the coronavirus, in response to calls for a centralized protest to press for demands.

The government has gradually begun easing a lockdown aimed at curbing the virus, and protesters have returned to the streets in small numbers in recent days. Saturday's protest was called for by grassroots organizations and civil society groups as well as several political parties, including some groups who have introduced for the first time demands for Hizbullah to disarm.

The participation of political groups and anti-Hizbullah slogans have upset some activists and protesters who say the focus should remain on addressing the country's economic crisis and calling for early elections.

Hundreds of Lebanese soldiers and riot police were deployed on major roads in the capital and its suburbs ahead of the protest. They later stood between supporters of Hizbullah and its allied Shiite Amal movement on one side and protesters on the other, some of whom shouted insults aimed at the Hizbullah leader, Sayyed Hassan Nasrallah.

Near the parliament building, a group of young men hurled rocks over cement barriers erected to seal off the area. Young men vandalized several storefronts, including a luxury French designer furniture company and a nearby hotel. Police responded with heavy tear gas.

In recent weeks, the Lebanese pound, pegged to the dollar for more than two decades, has lost 60% of its value against the dollar and prices of basic goods soared. Unemployment has risen to 35% and an estimated 45% of the country's population is now below the poverty line.

Federalism is the solution. There is a group who wants to put their Shia Shia Shia first then their food and state, so let them live in their block.

Lebanon as it's known is over with. Full stop end of story. It's a complete failed state in all it's true meaning. A banana republic is more worthy.