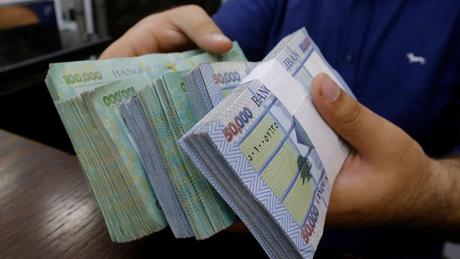 The Lebanese pound sank to a record low on the black market Thursday despite the authorities' attempts to halt the plunge of the crisis-hit country's currency, money changers said.

Lebanon is in the grips of its worst economic turmoil in decades, and holding talks with the International Monetary Fund towards securing billions in aid to help overcome it.

The Lebanese pound remains pegged to the US currency at a rate of 1,507 per dollar, but its value has tumbled on the black market.

Rates from three money changers on Thursday morning indicated it had lost almost 70 percent of its value there compared with the official rate.

One money changer who asked to remain anonymous said he was selling dollars at a rate of 5,000 pounds and buying them at 4,800.

Another in Beirut's Dahiya neighbourhood was buying dollars for 4,850 pounds.

In the south of the country, one person said they had exchanged dollars at the rate of 4,750.

The new nadir came despite government pledges to halt the pound's devaluation, and the money changers' union issuing a maximum daily buying rate of 3,890 and selling rate of 3,940.

Lebanon's economic crunch has caused poverty to soar to 45 percent of the population and unemployment to rise to 35 percent.

It has also sparked steep inflation, including on imported products.

Nabil, a retired 64-year-old, said his buying power had taken a blow.

"Yesterday I went to a home appliance store to buy a fridge, and the salesman asked me for $1,200 in cash, or the equivalent at an exchange rate of 5,000, which is six million pounds," he said.

International Crisis Group on Monday warned that Lebanon needed "emergency external assistance to ward off the worst social consequences of the crisis".

Lebanon, whose debt equivalent to more than 170 percent of gross domestic product (GDP) is one of the world's largest, defaulted for the first time in March.

That’s the price we are forced to pay for having a terrorist organization within the parliament’s walls.

Start buying wheel barrows, as you will need that to load up LL just to buy a loaf of bread, that is if there is bread.

Now Money Exchange unions are setting up monetary policy. You gotta love this country. I have been saying before some were arrested that the are the ones playing/manipulating the currency. It' a cartel. There's a reason they are paying so much for the USD.

The lira is worthless because the country and its management are worthless. Have you ever tried converting liras in dollars or euros when you’re abroad? I have, and they laughed at me. And this was like 10 years ago.

and that IF they know the lebanese lira!

No I have not. Although I have some Liras with me left over from last time I was in Lebanon. I just put them away and dig em up when i decide to go so I have a few Liras on hand upon arrival.

The bitter price of wilayet el fakih and submission to Iran.