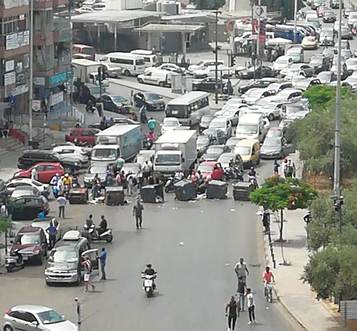 Protesters closed the Beirut areas of Qasqas, Corniche el-Mazraa and the roundabout of Cola on Wednesday amid rising anger as the dollar exchange rate hit new highs amid an unprecedented economic and monetary crisis driving Lebanese into poverty.

The National News Agency said the security forces tried to persuade the protesters to open the road, but a large number of citizens came and joined the sit-in.

Army and security forces arrived at the site to appease the situation, said NNA.

In the evening, protesters in Naameh blocked the vital highway that links Beirut to the South. Others meanwhile blocked the Antelias highway after the army prevented them once from cutting off the route.

Inside Beirut, protesters blocked the two main roads in the Hamra district and the Corniche al-Mazraa, Verdun, Qaqas and Sports City roads.

Electricity cuts increased in Lebanon and the government raised the price of bread for the first time in more than a decade on Tuesday.

Reflecting the deteriorating conditions in Lebanon and sharp increase of food prices, the Lebanese army stopped offering meat in meals given to soldiers while on duty because the military “is suffering from difficult economic conditions,” reported NNA.

Economy Minister Raoul Nehme told reporters after a Cabinet meeting that he will issue an order Wednesday to increase the price of 900 grams (32 ounces) of bread, a main staple in Lebanon, by 33% to 2,000 pounds ($25 cents). He urged people not to stock flour at homes saying there is enough stocks in the country.

Owners of bakeries have been complaining that prices of plastic bags, yeast and diesel have been rising urging the government to allow them to raise the price. People had to stand in long lines outside bakeries in recent days amid the rush.

Flour is subsidized in Lebanon and along with medicine and oil products, the central bank has been funding their imports at the official price of the U.S. dollar that stands at 1,507 pounds.

People were also buying candles as the electricity that is usually cut three hours a day in Beirut was cut for much of the day on Tuesday.

On the black-market, the dollar moved closer to 9,000 pounds on Wednesday marking another blow to many Lebanese who have seen their purchase power crash over the past months.

The protest have accomplished absolutely nothing. As a matter of fact things have gone from bad to worse. Enough already, they need to focus the anger on the thieves and the protesters know who they are where they live so go to their homes which were purchased with your money and pull them out and lock them up and demand the ICC take charge of them and have them judged by international judges as we all know our judges are corrupt to the core. DO what MBS did...

True they have accomplished absolutely nothing. They are not a united front. Too many groups and each with it's own set of grievances. One day it's the banks, next the currency, then it's political class, sectarianism, and the list goes on. Have people who are articulate to speak infant of the cameras instead of the yelling and screaming.

Do sit ins infront of parliament like they did and shut the county for 2 years. Do sit ins at the Serail and at Ba'abda

They obviously have not heard the latest from Kanaan that the economy is in fact fine.