Kassim Tajideen Arrives in Beirut after U.S. Releases Him 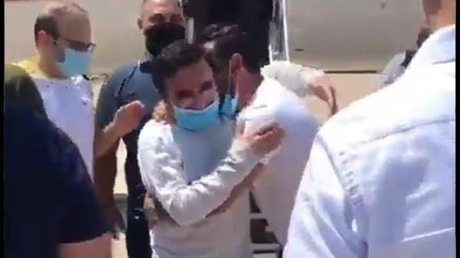 A Lebanese businessman serving a five-year sentence in the United States for allegedly providing millions of dollars to Hizbullah arrived Wednesday in Beirut after his early release, local media reported.

Kassim Tajideen was sentenced last year in a federal court in Washington for his alleged role in a money laundering conspiracy aimed at evading U.S. sanctions. He was arrested in Morocco and extradited to the U.S. in 2017, where he was he was charged with laundering money for Hizbullah.

There was no immediate comment from U.S. or Lebanese officials on his early release.

Lebanon' National News Agency reported Tajideen's arrival. LBCI TV broadcast a video taken with a mobile phone of his arrival at the Beirut airport. He stepped out of a small jet, wearing a face mask as a necessary coronavirus precaution. The video shows a man rushing toward Tajideen, hugging him and stooping down to Tajideen's feet in celebration of his release.

In a statement, Tajideen's family welcomed "his return to Beirut after a painful absence of over three years in prison in the United States."

It said his return had been delayed "until a plane was provided to transport him and other Lebanese citizens from the United States to Lebanon."

A Washington federal judge had ordered the release of Tajideen in May. The National, an English-language newspaper in the United Arab Emirates, said the 64-year-old Tajideen was granted compassionate release due to health conditions and fears of coronavirus infections in prison. The U.S. Department of Justice had contested the release.

Tajideen was accused of conspiring with at least five other people to conduct over $50 million in transactions with U.S. businesses, in violation of sanctions that barred him from doing business with U.S. nationals and companies because of his suspected support for Hizbullah.

In March, Lebanon's Military Court ordered the release of a Lebanese-American held in the country for nearly six months on charges of working for the Israeli-backed South Lebanon Army militia two decades ago. Amer Fakhoury's release raised speculation that Tajideen may be granted early release in return. But Tajideen's lawyer has said there has not been a swap.

Fakhoury, 57, who had faced decades-old murder and torture charges in Lebanon, became a U.S. citizen last year, and is now a restaurant owner in Dover, New Hampshire. U.S. officials had called for imposing sanctions on Lebanon to pressure Beirut to release him.