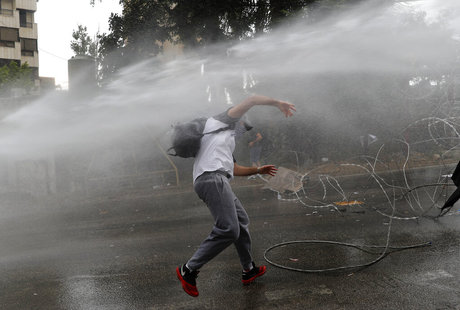 Dozens of Lebanese protesters held a raucous anti-U.S. rally outside the fortified American Embassy in Awkar on Friday, denouncing what they said was Washington's "interference" in Lebanon's affairs while some chanted in support of Iran-backed Hizbullah.

The crowd, made up of mostly young men who support Hizbullah and allied political parties, hurled stones at riot police near the embassy, from which they were separated by layers of barbed wire. Some protesters tried to remove the wire, at which point they were sprayed with water cannons.

The protesters burned American flags and mock-up dollar bills, calling the U.S. the "mother of terrorism." The riot police eventually escorted the crowd away from the embassy area.

This is the second anti-U.S. protest in Beirut and its suburbs this week amid strained U.S.-Lebanese relations. Although the U.S., along with Israel and some other Western countries, has designated Hizbullah a "terrorist" group, Washington is also a major donor to the Lebanese Army.

Lebanon is facing its worst economic and financial crisis, which has triggered anti-government protests and created domestic political tension between rival groups.

Dozens of Lebanese also protested Wednesday near the Beirut airport, on the day General Kenneth McKenzie, the commander of the United States Central Command, visited Lebanon. The protesters denounced his visit and chanted "Death to America."

All the photos I saw there, not one single protester had a Lebanese flag. They were Communists, Hizbos, even picture of Jamal Abdul Nasser. I mean it doesn't get any better than that.

The groups you mentioned have a much bigger following in Lebanon than the handful of pro Israeli demonstrators who waved the Zionist occupied American flags at the US Embassy.

So you say though not supported by facts.
In fact, the opposite is true.

Mystic, 99% of the American people do not know anything about Lebanon and Israel other than what they hear from the wealthy Zionists who mostly own the media and run US foreign policy. Don't say American. Say Zionist lobby who now occupy America, but like everything else it will change.

Where is SOS and his 9 different sign on names and dislikes???

down with Liberia lol yeah