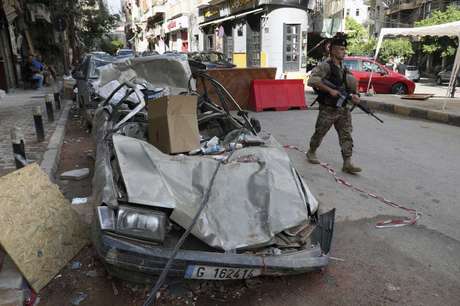 A Lebanese judge on Monday began questioning the heads of the country's security agencies over last week's devastating blast in Beirut as another Cabinet minister resigned in protest.

Justice Minister Marie-Claude Najm, who was sprayed with water and verbally attacked last week while visiting a damaged area, meanwhile handed her resignation to the prime minister on Monday, the news agency said. She is the third Cabinet minister to resign over the blast.

A Cabinet meeting is scheduled for Monday, amid speculation the government could resign en masse. If a total of seven out of the 20 ministers resign, the Cabinet would effectively become a caretaker government. At least nine members of parliament have resigned.

The Aug. 4, blast killed 160 people and wounded about 6,000, in addition to destroying the country's main port and damaging large parts of the capital. Losses from the blast are estimated to be between $10 billion to $15 billion, and nearly 300,000 people were left homeless in the immediate aftermath.

The explosion is believed to have been caused by a fire that ignited a stockpile of explosive material that had been stored at the port since 2013. The disaster has been widely blamed on years of corruption and neglect by the entrenched political leadership that has governed Lebanon since its 1975-1990 civil war.

The investigation is focused on how 2,750 tons of ammonium nitrate, a highly explosive chemical used in fertilizers, came to be stored at a warehouse in Beirut's port for six years, and why nothing was done about it.

State Security had compiled a report about the dangers of storing the material at the port and sent a copy to the offices of the president and prime minister on July 20.

On Sunday, world leaders and international organizations pledged nearly $300 million in emergency humanitarian aid to Beirut in the wake of the devastating explosion, but warned that no money for rebuilding the capital would be made available until Lebanese authorities commit themselves to the political and economic reforms demanded by the people.

Protesters have clashed with security forces over the past two days in Beirut. The demonstrators blame the explosion and a severe economic crisis on the ruling elite and are calling for sweeping political change. Similar demonstrations last autumn fizzled out after several weeks.

Iran meanwhile expressed concern that Western countries and their allies might exploit anger over the explosion to pursue their political interests. Iran supports the Hezbollah militant group, which along with its allies dominates the government and parliament.

Iranian Foreign Ministry spokesman Abbas Mousavi said "it is natural for people to be frustrated." But he said it would be "unacceptable if some individuals, groups and foreign countries use the incident as a pretext for their purposes and intentions."

The Iranian government should mind their own business. Lebanon is not an Iranian province and will eventually extricate itself from Iran-Hizbullah's domination.

nor any other country province .

Don’t even give air to the Iranian government. They are oxygen thieves!

always remember no one just no one will give you oxygen without a price .. always ask yourself what could be the hidden price . thank you