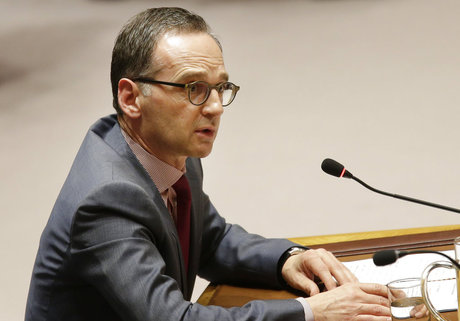 Germany stands ready to help Lebanon with reconstruction and further investment after last week's massive explosion, but any support will be linked to economic reforms and an end to pervasive corruption in Lebanon, Germany's foreign minister said Wednesday.

Heiko Maas spoke after a tour of Beirut's devastated port, where thousands of tons of ammonium nitrate exploded Aug. 4, obliterating the facility, killing at least 171 people and wounding thousands in the capital city.

It still was not known what caused the fire responsible for igniting the ammonium nitrate. But documents have emerged in the wake of the explosion that show the chemicals had been improperly stored in the city's port for more than six years, apparently with the knowledge of top political and security officials.

"The dimension of devastation and destruction is almost inconceivable for people living in Germany, and therefore it was also so important for the German government to help quickly," Maas said.

He said he brought 4 million euros to the Red Cross and the United Nations because Germany wants the money to arrive where it is needed and "not for it to disappear in dark channels of which there are unfortunately way too many in Lebanon."

"Other than that we hope that the responsible politicians have understood the sign of the times. The rage of the people is understandable," Maas said.

The explosion has fueled outrage and protests against top political leaders and led to the resignation of the government Monday. The Cabinet is now in a caretaker capacity.

Ahead of his arrival in Beirut, Maas said Lebanon needs a "strong reboot" and far-reaching economic reforms to rebuild trust with its citizens.

Germany has pledged 20 million euros (about 23 million dollars) in immediate help after the explosion that tore through the Lebanese capital with such intensity that it created a tremor felt in neighboring Cyprus. Thousands of buildings in the heart of Beirut were destroyed and around 300,000 people were left homeless.

Maas said he would hold talks in Beirut to see how the money can quickly get to the people who need it. He said he would also talk to the nation's political leaders and representatives of civil society about the future of Lebanon.

"I think everyone in Lebanon has to recognize that things cannot continue like this, this country needs big reforms," he said.

"The country now needs a strong reboot and far-reaching economic reforms. It's the only way Lebanon can create a good future for its youth. It's the only way to build the needed trust," he said.
.
reboot !!??? yes ...a Catholic President...a Catholic Head of Cabinet...Catholic Head of parliament...the return of 2 miilion of Meca refugies...the reboot that the Protestants are asking for Lebanon is for the Cristhians losing political powers and the change of the eletoral system with 2 million of meca refugies that the Protestants+Mecca wants to give the vote right in Lebanon...we are assisting the Judas west selling Lebanon to Meca !! they defend for Lebanon what they defend to Europe, the Islamization and persecution of the Catholics...

Dude what are you smoking

tric.portugal.You are definitely hallucinating. Your pathetic response shows that you know nothing about Lebanon...
Samir-Sweden

"The explosion has fueled outrage and protests against top political leaders, and led to the resignation of the government on Monday. The Cabinet is now in a caretaker capacity."
.
the resignation of the Cabinet was because the West do not support them after the Daesh atacks...the West is the Voice of those who made the atack agaisnt the Cristhianity in Beirute...the Message of the protestants+Torah+Meca to the Cristhianity in Lebanon is clear...Convert or Die...

give it a rest dude---your rants are nonsense and you care nothing about christians or christhianity (whatever the f that is) and are just an pro iranian shill.

Reforms? Imagine that the commander in chief and the officers and all new candidates of the fire brigade must be arsonists, so how can you expect that the fire will be extinguished? To my opinion that’s the problem in Lebanon , they are all warlords
their qualifications and characteristics :high level of insulting ,screaming, fighting, stealing, abusing and lack of skills in negotiation, strategic planning, cooperation and constructive thinking.