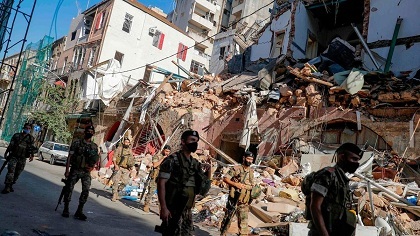 Lebanese authorities came under more fire from an anxious public after Thursday's search and rescue operation for possible survivors under rubble in Beirut, was paused for two hours.

The army said Friday the efforts had been halted because chunks of the building's wall could fall on rescuers.

Work was resumed at 2230 GMT after military engineers with the help of two cranes "managed to secure the building for work to resume", it said.

The stoppage sparked an outcry online.

"There is a heart beating in Mar Mikhail, and there are heartless officials who decided to stop the rescue operation," activist Zahia Awad tweeted.

Hopes emerged Thursday that one of them could be found alive after a specialist sensor device detected a heart beat under the debris of a collapsed building.

Chilean and Lebanese rescuers on Friday lifted chunks of rubble from the site between the hard-hit districts of Gemmayzeh and Mar Mikhail, an AFP photographer said.

UNICEF on Friday said "600,000 children live within a 20-kilometre radius of the blast and could be suffering negative short-term and long-term psychological impacts."

Hassan Diab, who quit along with his government after the blast, said 2,750 tonnes of ammonium nitrate had blown up. The fertiliser had been stored in a portside warehouse for years, without precautionary measures.

Several gatherings, including a minute's silence, organised by civil society groups and families of the victims are planned for Friday afternoon to mark one month since the blast.

"The city is deeply wounded. It will take a lot to move forward, we have not even begun the work."

It’s obvious that these LAF officers never played Jenga and mikado in their youth. Time is of the essence, the victim may not have an additional 2 hours to spare. Let the international rescuers decide, not the incapable, incompetent, corrupt LAF.