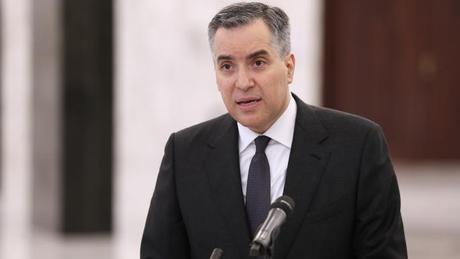 Prime Minister-designate Mustafa Adib issued a statement on Monday urging Lebanon’s competing political parties to work towards the success of the French initiative, saying the country does not have the luxury of time amid its prevalent collapse.

Adib urged them to step up and help him form a desperately needed independent government to save the crisis-hit country.

“Lebanon cannot afford to waste time amid its unprecedented financial, monetary, economic, social and health crises it is going through,” said Adib in his statement.

"The suffering of Lebanese, resonating across the country and through death journeys at sea, requires cooperation of all parties in order to facilitate the formation of a mission government with a specific program that political parties have previously pledged to support,” said Adib.

He said the new “government composed of experts must be capable of stopping the collapse and start work to bring the country out of its crises, and restore the citizens' confidence in their country and its institutions.”

“I will spare no effort to achieve this goal in cooperation with President Michel Aoun,” added Adib, urging all political parties to “immediately make the French initiative succeed without delay, which opens the road for Lebanon’s rescue and stops its quick deterioration.”

The PM-designated warned the crisis could “deepen and aggravate” in case of further delay, “it will push more people into poverty, and the state towards more disability. I don’t think that anyone bears to hold their conscience responsible for causing more pain to this people who have suffered so much and still are," stated Adib.

Adib is under pressure to form a fresh cabinet line-up as soon as possible so the new government can launch a raft of reforms required to unlock billions of dollars in foreign aid.

Lebanon was mired in its worst economic crisis in decades and battling the novel coronavirus pandemic, even before one of the world's biggest non-nuclear explosions at the Beirut port last month.

Adib's efforts to form a government have been effectively blocked by the two main Shiite groups in Lebanon's usual power-sharing arrangement -- Amal and Hezbollah.

Observers have said their insistence to keep the finance ministry is linked to recent US sanctions against a former minister from Amal, as well as Hezbollah-linked businesses.

The August 4 explosion of hundreds of tonnes of ammonium nitrate at the Beirut port killed more than 190 people, wounded thousands, and ravaged large parts of the capital.

No initiative French or otherwise will succeed if it does not acknowledge our shia rights to the Finance ministry and our Iran given rights to carry arms and protect Lebanon from the Israeli-American-Saudi axis.

france sticks its nose in lebanese politics and the idiot accepts it. dont call yourself lebanese, an agent would be far more real.

Maybe France is trying to stick its nose into Lebanese politics, but one thing is certain, Iran for years has stuck its nose in through its support both militarily and politically of Hizballah.