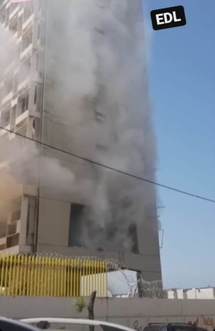 The first fire broke out on the first floor of the headquarters of state-run Electricite du Liban in the Mar Mikhail area, which was badly damaged by the Aug. 4 explosion at the adjacent Beirut port.

The reasons behind the fire remain unknown according to the National News Agency.

“Employees and Beirut Fire Brigade crews managed to contain the blaze and only material damage was recorded,” NNA said.

The fire sparked alarm on social media among traumatized Lebanese who have witnessed several fires at or near the blast site since the explosion.

"Tuesday's curse #Beirut. Another Tuesday, another fire," wrote one resident on Twitter, referring to the August 4 explosion that killed more than 190 people and injured at least 6,500 others -- and which took place on a Tuesday.

Ali Najem, a spokesman for the Beirut Fire Brigade, said papers in the office had caught fire but that he was not authorized to disclose the original source of the blaze before investigations had been completed.

Charbel Saleh, an EDL employee, said it was a short-circuit fire, adding that it was doused a few minutes after it ignited.

At least two fires have broken out at Beirut's port since the August 4 explosion, prompting widespread anger and alarm.

And on September 15, also a Tuesday, firefighters put out a blaze at a building designed by the late British-Iraqi architect Zaha Hadid that was under construction in the capital's downtown area near the port.

Separately, the Directorate General of Civil Defense said Tuesday that its firefighters, assisted by the Beirut Fire Brigade, managed to put out a fire that erupted in a room containing a power generator and a diesel tank on the ground floor of a residential building in the Beirut neighborhood of Qureitem.

The only way EDL survives and power is 24/24 is for it to be privatized.