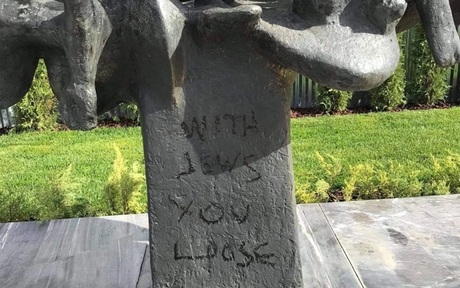 Several Jewish cemeteries and a Holocaust memorial have been desecrated in Greece, the country's Jewish council said Monday, just days after neo-Nazi leaders were jailed in a landmark trial.

A graffiti saying "With Jews you lose" was sprayed Friday onto a monument dedicated to the 50,000 Jews of Thessaloniki in northern Greece exterminated during the Holocaust, the Central Board of Jewish Communities in Greece (KIS) said in a statement.

The acts of vandalism come after the leader of Greece's neo-Nazi party Golden Dawn and his inner circle were handed 13-year prison sentences on Wednesday.

The sentences represented a major downfall for a party that had been the country's third most popular in 2015 when the trial began.

In total, more than 50 defendants were convicted of crimes ranging from running a criminal organization, murder and assault, to illegal weapons possession.

KIS, which represents the Jewish community in Greece, said it "condemns this new wave of vandal attacks, launched by the followers of bigotry and fanaticism."

Greece's foreign ministry, meanwhile, denounced the desecration of the monument in Thessaloniki as "an unacceptable act which damages the memory of our fellow citizens and all victims of Nazism."

On October 5, a Jewish cemetery had also been desecrated near Athens just two days before the verdict of the Golden Dawn trial.

"Juden Raus", a phrase once used by the Nazis that means "Jews Out" in German, had been painted in black on the outside fence of the cemetery in the town of Nikaia, along with a symbol similar to the swastika used by Golden Dawn.