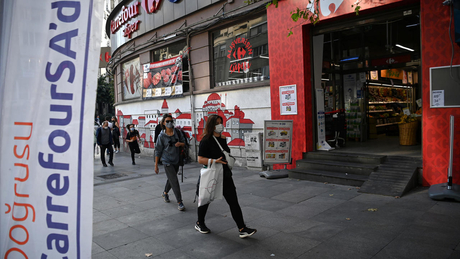 Some Turks were happy this week to see President Recep Tayyip Erdogan teach France a "good lesson" with a "long overdue" call for a boycott, but others said the move was "irrational" and "impossible to apply."

Masked customers were coming and going as usual at one branch of French supermarket chain Carrefour in Istanbul's Sisli district on Tuesday.

Daim Kara, 51, proclaimed himself a boycott supporter even as he left the store with his arms full of goods.

"I buy at Carrefour, but they're Turkish products," he told AFP, showing his purchases.

"I support the boycott call because they are threatening Turkey. They despise Muslims," he said.

Kara added that he also supported banning goods from Israel, one of the many countries with which Turkey has uneasy relations.

Ties between NATO allies Paris and Ankara were already tense, especially because of France's support to a Syrian Kurdish militia viewed by Ankara as "terrorists", and disagreement over Libya and the eastern Mediterranean.

But the relationship has rarely deteriorated to this extent, with Erdogan at the weekend calling for French President Emmanuel Macron to get "mental health checks" and Paris responding by recalling its ambassador to Ankara.

The Turkish leader renewed his personal attack against Macron on Monday, accusing him of leading a "hate campaign" against Muslims by supporting cartoons of the Prophet Mohammed.

Caricatures of Mohammed are strictly forbidden by Islam.

For Mahmut Atilla, 70, the call by Erdogan will not change anything.

"I already boycott anyway, I always lean towards Turkish products. For instance I don't drink Coca Cola, I boycott American products. Why wouldn't I? I have local fruit juices, orange juice, I'd rather drink that," the retired man grumbled.

Murat, a square-jawed 30-year-old sitting at a café, said it was "long overdue", adding: "We have to teach Macron a good lesson!"

Supporters of Erdogan on Twitter published a list of French labels to avoid, but some users pointed out they appeared to overlook the Turkish First Lady's penchant for the French luxury brand Hermes.

However, calls for a boycott did not seem to be more virulent in Turkey than in the rest of the Muslim world.

Qatar and Kuwait withdrew French goods from some stores, but in most other Arab countries, such as Egypt and Saudi Arabia, boycott calls were limited to social media.

The effect of Erdogan's move on trade between Turkey and France -- which was worth around $17 billion last year -- is difficult to predict.

But it has not stirred the same enthusiasm as his call in 2018 to boycott American electronic goods during tensions between Ankara and Washington.

At the time, several Turks filmed themselves breaking their Apple iPhones on the ground or running them over with cars, but so far French products have been spared the same fate.

What's more, the strained Turkey-France relationship comes as Turks are already worried for their economy, which has suffered a heavy blow from the coronavirus pandemic.

The Turkish lira, which has lost over 25 percent of its value against the U.S. dollar since the start of the year, declined again in the wake of Erdogan's rants.

The currency hit another record low of 8.14 against the greenback at 1200 GMT on Tuesday.

Against this backdrop, the call to boycott French goods risks "having a negative impact on Turkey," a worried Guzide Kosifoglu said.

She said the "irrational" decision was "taken emotionally."

"We must not forget that many French brands' products are manufactured here. It provides jobs for many Turks," said Kosifoglu, who works in the tourism sector -- currently facing an unprecedented crisis.

From the Renault production center in Bursa, northwest Turkey, to the countless boutiques of French luxury brands in Istanbul, from insurance to food flavorings, French companies are a significant source of jobs.

"In a world where commercial links are intertwined, (a boycott) doesn't seem very sensible to me... and it's impossible to apply," Murat Kaymaz, 47, said.

"If a product is good quality and satisfies me, I don't pay too much attention to its origin. It doesn't matter if it's Italian or French," he added.