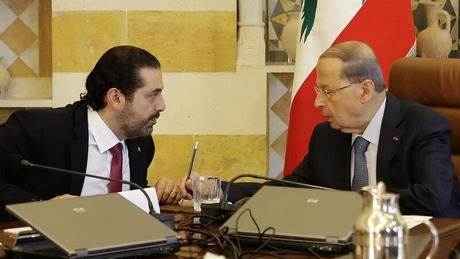 The gridlock preventing the formation of a government in Lebanon shows no signs of easing well into the second month after the designation of PM Saad Hariri for the task, reports said Tuesday.

Despite a whole series of crises impacting the country and driving its people into the line of poverty, the authority’s paralysis dominates the scene, they added.

According to sources concerned with the government formation, “since the last meeting between President Michel Aoun and PM-designate Saad Hariri, there has been no sign of leniency in the positions,” they told al-Joumhouria daily.

They added that the President insists on having a major role in naming the ministers for the designated ministerial portfolios, but mainly, he adamantly insists on naming the Christian ministers, the sources said.

Insistence on naming the majority of the Christian ministers, that is, 7 ministers who constitute one third in the government, grant them veto power to contest the cabinet decisions.

President Aoun reportedly also wants to retain the portfolio of the Energy Ministry for his political team, in the same way that the Ministry of Finance is retained within the Shiite quota.

On the other hand, reports said the PM-designate presented a cabinet format to the President that failed to meet the latter’s approval. Hariri refuses to give any party veto power to obstruct the cabinet decisions.

God bless Shia appointed Christian President Michel Aoun for insisting on having a major role in naming the ministers for the designated ministerial portfolios in order to ensure the proposed government is made up of independents and experts in their fields and above all loyal to our Shia resistance and the Islamic Republic of Iran.

.... The same political team that was in charge of the Energy Ministry for the last 11 years and cost the treasury more than $52 billion due to waste and corruption!

sadly, these political morons will never change; only way out of this mess the government have created since 1990 is to get rid of all the former war lords. Until then, Lebanon will continue to spiral out of control.