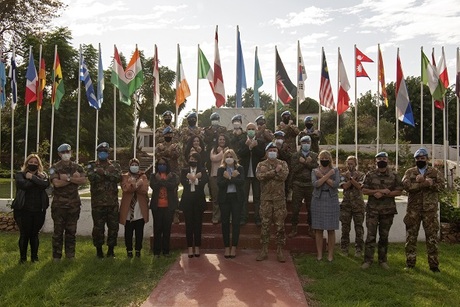 UNIFIL on Wednesday joined the National Commission for Lebanese Women (NCLW) in marking the International Day for the Elimination of Violence against Women and the start of the 16 Days of Activism against Gender-based Violence at the Mission’s headquarters in Naqoura.

Speaking at a ceremony, attended by NCLW President Claudine Aoun and other dignitaries, UNIFIL Head of Mission and Force Commander Major General Stefano Del Col said the COVID-19 pandemic has had a severe social and economic impact in the communities and deepened the existing inequalities, including gender inequality.

“The pandemic has also increased, globally, the levels of domestic and sex and gender-based violence to unprecedented levels," he said. “More than ever, women and girls need protection and security.”

“UNIFIL is proud to support you in your efforts and work with you for a better future for the Lebanese women and girls,” he added.

Del Col said UNIFIL has been working with the Social Development Centers and “South Lebanon Sex and Gender-Based Violence Working Groups in the Mission’s area of operations to prevent and respond to incidents of violence. They are doing this by creating safe spaces for victimized women, and by engaging first responders in socio-psychological training."

“Violence against women and girls is malice that we as humanity should persevere to eliminate NOW. UNIFIL is committed to the U.N Secretary-General’s UNiTE campaign to End Violence against Women by 2030.” he said. “Protection, security and economic growth of women and girls is at the center of the U.N. for a more peaceful and prosperous world that leaves no one behind.”

The global observance for the Elimination of Violence Against Women, under the theme “Orange the World: Unite to End Violence Against Women,” is part of an initiative launched in 2008 and known as the UNiTE campaign to end violence against women and girls. It aims to raise public awareness around the issue as well as increase both policymaking and resources on the issue.