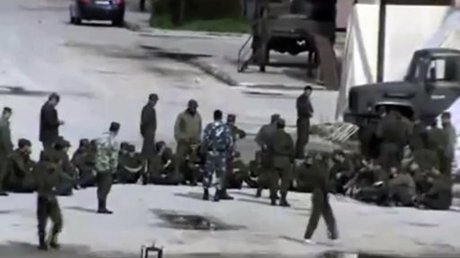 Syrian security forces raked the central protest city of Hama with heavy machinegun fire and explosives on Wednesday for the second straight day, as troops killed 18 civilians and six army deserters across the country, activists said.

"The Syrian army is bombarding Hama with heavy weapons, using rocket-propelled grenades," said a statement from the Local Coordination Committees, which organizes anti-regime protests on the ground.

"The 'shabiha' (regime militiamen) and security agents backed up by tanks are pounding all parts of the Baba Qibli neighborhood," said the LCC.

"There will be dead and wounded. Houses have collapsed," it said, adding about 4,000 soldiers supported by tanks were in the rebel town 210 kilometers north of Damascus.

Baba Qibli was the scene of massive protests and where mutinous soldiers of the Free Syrian Army have been holed up, Saleh al-Hamwi, spokesman of the General Revolution Commission, told Agence France Presse on Tuesday.

Meanwhile, the Local Coordination Committees, the main activist group spurring protests on the ground, said security forces killed five people in the restive countryside around Damascus, four people in Hama, four in the central opposition bastion Homs, three in the flashpoint northwestern province of Idlib, one in the northern province of Aleppo and another in the southern province of Daraa, the cradle of the uprising.

For its part, the Syrian Observatory for Human Rights said there was at least one dead in Hama.

"One civilian was killed on Wednesday at dawn in Hama's Sheikh Anbar district, which has also been the target of army fire along with Baba Qibli," it said in a statement received by AFP in Nicosia.

The General Revolution Commission called for Sudan's General Mohammed Ahmed Mustafa al-Dabi, who heads the Arab League monitoring mission to Syria, to "come and see the tanks in Hama before they destroy the city."

"These tanks could be withdrawn in 10 minutes by the Syrian forces and hidden at Hama's military airport," it added.

The city has already been the target of major military offensives to make its rebel residents bow to the regime of President Bashar Assad.

His father Hafez, who died in 2000, set his armed forces on the city in 1982 to put down an armed revolt by the Muslim Brotherhood, killing an estimated 20,000 people.

Syria's al-Watan newspaper, which is close to the authorities, said on Wednesday the military had launched an offensive aimed at retaking several districts in Hama that were controlled by insurgents.

It said the assault followed "the failure of efforts" to come up with a peaceful solution.

"The competent authorities have decided to resolve the matter in a definitive manner in order to relieve the city of armed militias," it said.

The authorities "yesterday morning launched a campaign to clean up the cramped residential areas of Baba Qibli, Jarajima, Farraya, Olayliyat and Hamidiyeh, after leaving the door open to those who wished to surrender and lay down their arms," al-Watan said.

The Observatory said 33 civilians were killed by fire from the security forces across the country on Tuesday, 23 of them in the central province of Homs.

"Another 19 civilians died on Tuesday when two buildings in Homs city's Bab Tadmor neighborhood collapsed and burned after being bombarded by security forces," it added of Syria's third largest city, citing residents.

Gabby, which game seems to be over? Do you have any hidden plans? Any rabbits to take out of your hat? How about the hat of Dr. Khashakhisho Geagea? Please explain. Bests.

Lies and bad faith reporting as usual :( in fact it's all quiet in Syria , the troubles were over weeks ago as the magnificent GMA promised and we all know his promises are a sure thing .

GMA master of the game of Peekaboo .

Sent from my iPhone in the 24/7 electricity supplied Lebanon as promises by GMA 'S sexy SIL .

bark as much as you want sooner or later hopefully soon Bashar's regime is going down. followed by hezbelsheitan & of course @ phenicien your beloved GMA the clown will suddenly dissapear from the face of the earth hiding somewhere.

Keep laughing and blowing cooking boy in Dahye. Shia love to see others slaughtered. Be sure to stay on line when things go the other way. By the way stop changing your on-line name so we can keep up with your disguises. I want to be sure to be able to write you when ASSad is swinging next to his mother from a rope.

You love it that little Bashar wants to show the people of Hama how he can be like his daddy 30 years later. The next time bombs drop on your mother in Dahye, don't expect any sympathy from me.

It amazes me how confident are the anti bashar folks about his demise. It has been 10 months and not even close yet they keep talking big like it is a sure thing.

I take Bashar over the muslim brotherhood and salafis on any given day of my life. He is the "bad" guy that I know and he is secular. Enough said. I hope he kicks the brotherhood's butt. And keeps on doing so.