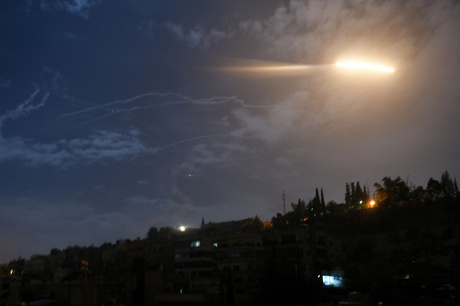 The Syrian military official said the attack was aimed at several targets in and near the central province of Hama. It added that Syrian air defense units shot down most of the missiles.

It was Israel's first strike on Syria since President Joe Biden took office.

Tension has been high in the Middle East over the past weeks as many had feared retaliation for the U.S. killing of Iran's Revolutionary Guard commander Qassem Soleimani last year in Baghdad.

On Jan. 13, Israeli warplanes carried out intense airstrikes in eastern Syria apparently targeting positions and arms depots of Iran-backed forces. At least 57 fighters were killed and dozens were wounded, according to a Syrian opposition war monitoring group.

The Syrian Observatory for Human Rights, an opposition war monitor that tracks Syria's war, said it recorded 39 Israeli strikes inside Syria in 2020 that hit 135 targets, including military posts, warehouses or vehicles.

Israel views Iranian entrenchment on its northern frontier as a red line, and it has repeatedly struck Iran-linked facilities and weapons convoys destined for Lebanon's Hizbullah group.

The strikes also come amid intensifying low-altitude Israeli warplane missions in Lebanese skies that have caused jitters among residents.

We all wish so Israel can level to the ground dahyeh from the sky.

"ado.australia:
Yes... Israel now needs permission from Russia to fly in Syria and Lebanon and even in northern Israel! S-400 is a game changer and now only the US F22 raptors can do anything without Russian permission! israel is even more upset as they now cannot even enter Lebanese airspace!!!! Now Israel is finally vonerable in Lebanese airspace!"

2 years ago:
Iran's national security council has warned Israel of a "firm and deterrent response" should it continue to strike targets in Syria.

"Mystic 15 minutes ago
The power of Iran cannot go unnoticed."

So what are the Iranians waiting for? 2 years to prepare a "firm and deterrent response".

I'd like to bet that the Israelis are not holding their breaths.
After yesterdays' terrorist attack in mid-town Baghdad, does this mean that Hisballah recognises Iraq as "the heart of occupied Palestine"?