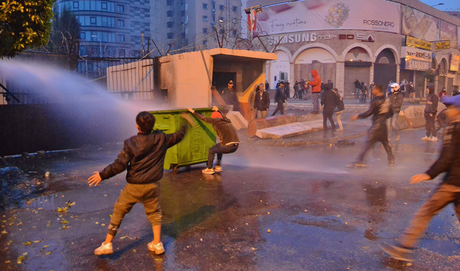 One of the protesters injured overnight in the Tripoli clashes with security forces succumbed to his wounds on Thursday, the National News Agency reported.

Overnight clashes erupted between security forces and protesters angered by the combined impact of a severe economic crisis and a coronavirus lockdown.

"My brother was in Tripoli watching the protests when he was hit," he said. "He was transferred to hospital and died this morning.

The 29-year-old man, who was employed in a bakery, became the first fatality -- reported also by local media -- of the protests that erupted earlier this week in Tripoli.

According to the National News Agency, a total of 226 people received treatment Wednesday night.

Tripoli was already one of Lebanon's poorest areas before the coronavirus pandemic piled new misery onto a chronic economic crisis.

Many of its residents have been left without an income since Lebanon imposed a full lockdown earlier this month in a bid to stem a surge in Covid-19 cases and prevent its hospitals from being overwhelmed.

A round-the-clock curfew is in force nationwide and grocery shopping is restricted to home deliveries -- a service that is often unavailable in poorer areas.

Authorities have extended the lockdown by two weeks to February 8.