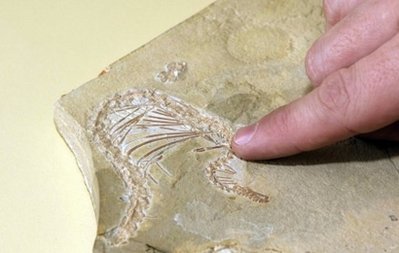 Ultra-sharp 3-D X-ray imaging of a 95-million-year-old fossil found in Lebanon has shed light on the evolution of snakes from limbed lizards, French scientists said on Wednesday.

The 50-centimetre (20-inch) fossil of Eupodophis desouensi shows a small hind leg attached to the animal's pelvis. It had been buried beneath its body, and was only visible thanks to the new technique.

The find adds powerfully to theories that snakes evolved from lizards but needed legs less and less -- and eventually lost them entirely -- after succeeding in habitats where crawling or slithering gave an advantage.

The new image shows that E. desouensi, at this point in the Cretaceous period, was at a partway stage in the change.

The residual leg is seen bent at the knee, with four ankle bones, but with no foot or toe bones.

"Fossils like this are key to understanding the origin of snakes, because they show the intermediate development," said Alexandra Houssaye, a paleobiologist at France's National Centre for Scientific Research (CNRS).

The imaging comes courtesy of a technique called synchroton laminography, which uses a high-resolution X-ray to delve below the surface and identify details just a few millionths of a meter (tens of thousands of an inch) across.

The fossil is rotated through 360 degrees during the scan, providing a three-dimensional image similar to the famous computed tomography (CT) technique used in hospitals.

The study appears in the Journal of Vertebrate Paleontology.

The E. desouensi find was made 10 years ago and caused excitement because a small hind leg about two centimeters (0.8 of an inch) long was found on the fossil's surface. Experts had long pondered whether a second rear leg could be seen.

There is no sign of forelegs, indicating that these limbs had already been eliminated through evolutionary pressure.