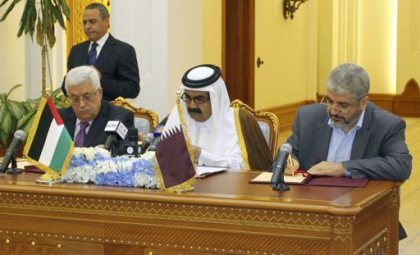 The Palestinian leadership on Thursday endorsed the latest agreement between the heads of Fatah and Hamas and called for preparations for elections to be speeded up.

Palestinian President and Fatah head Mahmoud Abbas and Hamas leader Khaled Meshaal inked an accord in Doha on Monday placing Abbas at the head of an interim government to supervise the run-up to elections later this year.

On Thursday, members of Fatah's Central Committee, the PLO Executive Committee and leaders of PLO-affiliated groups, gave "full support for the results of the Doha agreement," according to a statement read by the executive committee's secretary general, Yasser Abed Rabbo.

The leadership also urged Palestinian electoral officials to push ahead with the registration of eligible voters in the West Bank, Gaza and east Jerusalem and set a firm date for elections.

Under the terms of a reconciliation deal signed by Hamas and Fatah last April, presidential and legislative elections are due to be held by May of this year.

But implementation of the deal has stalled, with preparations for the vote set back by months.

"The Palestinian leadership has decided to call on the Central Election Commission to immediately begin to implement its plan of voter registration," the statement said.

The Doha deal has been hailed as a step forward in the stalled implementation of the reconciliation agreement, but it has come under fire from some Palestinian officials, who say installing Abbas as prime minister is illegal.

Hamas members in Gaza have expressed opposition to the agreement, along with some independent lawmakers, but Izzat al-Rishq, a member of the Hamas leadership in exile, said Thursday that the "breakthrough" deal would be implemented.

"Although there are differences, we agree on the fact that national reconciliation and the interest of our people are paramount," he told Shihab, a news agency close to Hamas.

The leadership meeting on Thursday also accused Israel of failing to come up with proposals that warranted the renewal of formal peace talks, stalled since late 2010.

"The ideas and propositions presented so far by the Israeli government are less than the absolute minimum required to start serious negotiations," it said.

Last month, Israeli and Palestinian negotiators held five rounds of exploratory talks in Jordan, sponsored by the peacemaking Quartet, which groups the United Nations, the United States, the European Union, and Russia.

But the meetings ended without a decision to continue discussions or return to direct peace negotiations.

The Palestinians have accused Israel of failing to present proposals on borders and security called for by the Quartet.

A Palestinian report on the Jordan meetings will be presented to the Arab League's follow-up committee on the peace process that is to convene in Cairo on Sunday, the leadership's statement said.