Ahmadinejad Says U.N. Sanctions Should Be 'Thrown in Trash Bin' 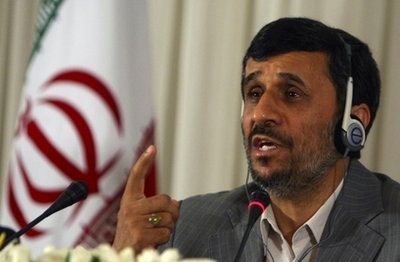 Iranian President Mahmoud Ahmadinejad led a chorus of defiant Iranian criticism of new U.N. sanctions imposed on the Islamic republic on Wednesday, saying they deserved to be "thrown in the trash bin."

"These resolutions are not worth a dime for the Iranian nation," he said.

"I gave one of them (world powers) a message that the resolutions you issue are like a used hanky which should be thrown in the trash bin. They are not capable of hurting Iranians."

The U.N. Security Council slapped a fourth set of punitive measures on Iran, hoping to persuade Tehran to curb its suspect nuclear program through broadened military and financial sanctions.

The vote in the 15-member council was 12 in favor of the U.S.-drafted resolution, with Lebanon abstaining and Brazil and Turkey voting against.

Iran denies the charge, saying it is pursuing nuclear technology purely for the peaceful goal of generating electricity.

Ahmadinejad, under whose presidency Iran has aggressively pursued its nuclear program, lashed out at world powers in a speech in the Tajik capital Dushanbe.

"Those who have atomic bombs, have used them, stored them or threatened others with them, keep issuing resolutions against us under the pretext that Iran might build an atomic bomb in the future," he said.

"Nothing will be changed. We'll continue without any interruption our enrichment activities under the full scope of IAEA safeguards... and the NPT (nuclear Non-Proliferation Treaty)," Soltanieh told reporters in Vienna after the sanctions were adopted.

"Even a second enrichment activity will not be suspended," Soltanieh said, referring to Iran's recent move to enrich uranium to a higher level of 20 percent purity.

"What happened today in New York was another dark chapter of mistakes and miscalculations" by Western nations, Soltanieh added.

Uranium enrichment is a process that can be used not only to make fuel for nuclear energy, but also the fissile core of an atomic bomb.

Iran has long been enriching uranium to low levels of purity, in defiance of three previous sets of U.N. sanctions.

Earlier this year, it started enriching to higher levels, ostensibly to make the fuel needed for a Tehran research reactor which makes radioisotopes for medical use.

Iran's atomic chief Ali Akbar Salehi on Wednesday slammed China, which has emerged as Iran's main trading partner of Iran in recent years, for agreeing to the sanctions.

"China is gradually losing its respectable position in the Islamic world and by the time it wakes up, it will be too late," Salehi told ISNA news agency.

"There was a time when China branded the U.S. as a paper tiger. I wonder what we can call China for agreeing to this resolution."

Salehi, who oversees Iran's nuclear program, also accused Beijing of "double standards" by taking a position towards "North Korea which has left the NPT different than with Iran which is a member of the NPT."

"We had made our move on the chessboard for cooperation and confidence building which was the Tehran declaration," he said of a nuclear fuel swap deal signed on May 17 by Iran, Brazil and Turkey.

"Now they (the world powers) are making their move and they have to wait for Iran to sum up the situation and make its next move."

And Iran's chief nuclear negotiator, Saeed Jalili, just minutes before the sanctions vote, said Tehran would deliver a harsh response if it were confronted with new U.N. measures.

"We remind them that a path of confrontation with a nation's rights is a dead end and bound to fail. It will be useless and costly for those who pursue it," Jalili was quoted as saying by state news agency IRNA.

"Choosing confrontation will be met with Iran's firm response."(AFP)