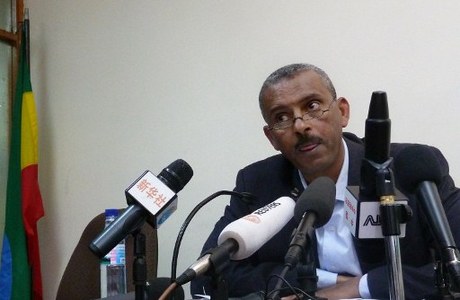 Ethiopia attacked an Eritrean military base on Thursday over the killing five European tourists on its territory earlier this year, accusing its neighbor of training "hit-and-run terrorists".

Government spokesman Shimeles Kemal also threatened further attacks against its neighbor so long as it posed a threat to its security and warned Eritrea against any retaliation.

"These groups are operating in Afar area in Ethiopia," he added.

"We know for certain that the Eritrean government harbors, supports, trains and deploys subversive groups that occasionally launch attacks on infrastructure inside Ethiopia," said Shimeles.

The attack took place 16 kilometers inside Eritrea but Shimeles did not say what the casualties were on either side.

In January, two Germans, two Austrians and one Hungarian were killed in an attack on the slopes of Ethiopia's famed Erta Ale volcano in the remote Afar region.

Ethiopia blamed arch foe Eritrea for the attack on the tourists, charges that Eritrea denied.

"The recent attacks against European tourists is one of the reasons for this retaliation," Shimeles said.

Shimeles said war was not likely to erupt between the two countries, insisting that Ethiopia was committed to peaceful negotiations.

But he warned: "As long as Eritrea remains a launching pad for attacks against Ethiopia, similar measures will continue to be taken," he said.

And if Eritrean forces retaliated, he warned, "the results would be disastrous."

In January 2010, Asmara accused Eritrea of launching attacks along their disputed border but said its troops had driven off the assault.

The same month Ethiopia said it had arrested three people trying to cross into the country to carry out attacks and accused Eritrea of having trained them.

Ethiopian Prime Minister Meles Zenawi in April accused the Eritrean government of trying to destabilize Ethiopia by backing rebel groups such as the Oromo Liberation Front, the Ogaden National Liberation Front -- and the Somali al-Qaida-affiliated Shebab.

He told lawmakers that Ethiopia was ready to help the people of Eritrea topple the regime of Issaias Afeworki, but ruled out a military invasion.

Meles said they had no intention to "jump into their country but we need to extend our influence there. If the Eritrean government tries to attack us, we will also respond."

Eritrea broke away from Ethiopia and won independence in 1993 after a 30-year struggle. The two countries fought a devastating 1998-2000 border war, which claimed at least 70,000 lives.