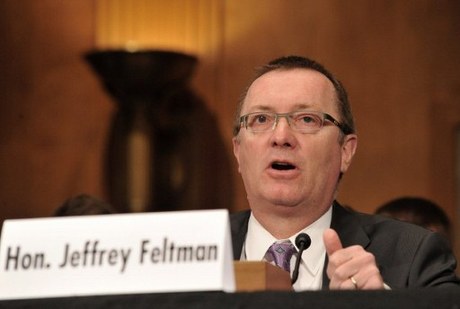 Lebanon has a moral obligation to support the fall of Syrian President Bashar al-Assad and should use upcoming elections to "reject the apologists of Assad's butchery," Assistant U.S. Secretary of State for Near Eastern Affairs Jeffrey Feltman has said.

In strongly worded remarks, Feltman paid tribute to the Lebanese who took to the streets after ex-prime minister Rafik Hariri's assassination in 2005.

Feltman, who was U.S. ambassador in Beirut during the so-called Cedar Revolution, said that supporters of Lebanon had a "moral as well as political obligation" to support Syrians fighting to topple Assad.

Feltman said that the Cedar Revolution had not yet achieved a Lebanon "free of Assad's manipulation" and of Iranian influence and urged Lebanese to look ahead to parliamentary elections due next year.

"I hope those Lebanese who are here with us today, along with millions of others back home in Lebanon, will again show the world how they can transcend fear -- in order to use those 2013 legislative elections to defeat the remnants of the Syrian occupation and reject the apologists of Assad's butchery," he said.

Assad is facing a revolt that poses the biggest threat to his family's four-decade rule over Syria. Rights activists say more than 9,100 people have died in a year-long crackdown to crush the uprising.

Report of a damaged Name Plate.
It should be read as Honk Jeffrey Feltman.

mind your business, go and get involved in US elections
don't throw any stones when you live in a glass house

The gathering to commemorate the "Cedar revolution" included Lebanese Americans and Syrian Americans who agreed on the same purpose of bringing Assad down and installing in syria a democratic regime.
The Monster of Syria might be surviving for now but with too many good people opposing him his fall is eminent.

You got it right youssefhaddad, the amercians want to replace Assad but the Syrian people want him to stay, and this is why he is staying. Syria is no Libya.

You can hate on Feltman all you want (and start spewing hateful comments towards me and other anti-Assad folks) but what he says is true, and real Lebanese who want to have an independent Lebanese identity ALL AGREE.
"No one outside of Syria understands the brutality of Bashar al-Assad better than the Lebanese."
We're sick of the fear and violence that this regime is so accustomed to delivering. khlisna ba'a! 40 years of corruption in Lebanon is enough. Let the Lebanese live in dignity and return to its glory days.

Are we witnessing an avant-gout of US-style democracy (i.e blatant interference in interior affairs) before the upcoming elections? Jeffry habibi, thank you for your kind advice, you too vote wisely in your country, and don't forget to bring flowers to your mama, it's mother's day.

What a nice little avant-gout of US-style democracy (i.e blatant interference in interior affairs) before the upcoming elections... Jeffry habibi, thank you for your kind advice, you too vote wisely in your country, and don't forget to bring flowers to your mama, it's mother's day.

He can hope anything all he wants. The Lebanese people will ultimately decide.

Please don't insult people. We despise Khamenei and Ahmadinjad.... We don't Call him 'animal'. Don't get surprised if you're censored (again!). You have a very selective memory FT. Who put tents downtown and closed the parliament for ages? The current opposition is very decent compared to what Amal and Hezbollah did 3-4 years ago. I told you, prevent people from stealing our/your electricity then I can guarantee you'll have 220 volts in your home 24/7. Of course, they should be punished for the damage done. A 10.000$ fine per household seems fair to me.

Without knowing it, you pointed out you real problem my friend. You call some people 'animals'. You have some kind of superiority complex. We're all human beings. I don't personally know this guy and I don't defend him but you can't just go insult people in society. That's why Lebanon is still a backward country that's regressing. Let us take advantage of the few good western things, one of them is tolerance. And if one day your 'enemy' insults you, be better than him don't insult him. Don't lower yourself to his standards.

jeffrey feltman never bombed his own cities or ordered a take over of his own capital so who's worse? Feltman or Nasrallah/Assad? You defend them very easily but say it's inhuman to defend Feltman.

Does that also apply to the KSA and Bahrein massacres? Probably not, those guys are USA minions and thus have a divine right of killing. Also who does he mean by the remnants of the Syrian regime: Harriri and Co., Michel El Murr, Farid Haykal el Khazen, Fares Boueiz, Joumblat…. or as usual all those who refuses to be USA puppets. Maybe, the next order is to assassinate the Pope, the Russian orthodox patriarch, the Maronite patriarch since all those refused to follow your order

BTW what if it was some Iranian or Syrian guys saying we should purge Lebanon of Isralei minions, what would have been the M14 reaction?

March 14, are you home? Hey, your mounasse2 Jeff is talking. Anybody there? Hey, siyedeh? Ya ho, 7orriyeh? Ya 3alam, isti2lel? Mar7aba? Hey, a thug among you is constantly attacking the army? Hello? I mean, Hello? HELLO? Never mind. You were never there when your being there mattered. Keep it up, punks.

If they stop stealing electricity in Dahieh mayby there will be more of it for the rest of the country and who is the number one violator of Lebanese border sovereignty? Israel and Syria both.

Hon Jeffrey Feltman. As to Saad Hariri, he is manno Hon.

no water no electricity. good work your government is doing. so you will vote your boys out if we dont get electricty or water by election time??

we'll just vote those who have been minningthe sector for 20 years, and give the good guys 4 more years to make right what Rafic HArriri destroyed

@keserweneh: if it were not for Harriri you will still be using your outside toilets in your village of kesrwen, you spiteful thug!

Hey warriors, what are you doing between now and June of 2013? Hibernate? Hang on tight.