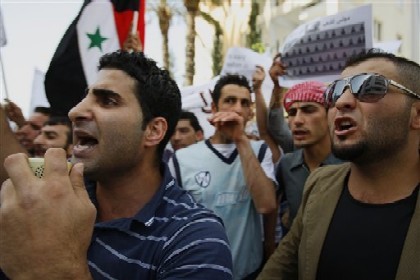 Syrian activists called for mass protests on Friday to denounce Arab countries for "abandoning" them as Syrian forces shelled rebel bastions in the central city of Homs and launched assaults in northwestern Idlib province.

"The Muslims and the Arabs have abandoned us ... but God is with us ... and our determination will carry us to victory," said a statement posted on the Syrian Revolution 2011 Facebook page, urging nationwide street demonstrations after the weekly Friday prayers.

Shells rained down on the Bab Tadmor, Bustan al-Diwane, Hamadiyeh and al-Safsafa neighborhoods of Homs, a main rebel bastion which has been the focus of much of the military's crackdown on anti-regime protests, they said.

Two people were killed near Bsas village, in Homs province, when the car in which they were travelling was fired upon, said the Syrian Observatory for Human Rights.

Before dawn, fighting broke out between the armed forces and rebel fighters in the towns of Harasta and Irbin, in Damascus province after insurgents fired rocket-propelled grenades at a security post.

Fierce fighting was also reported in the provinces of Hama, in central Syria, and Deir al-Zour in the east, said the Local Coordination Committees, which organizes anti-regime protests.

An Arab League summit in Baghdad on Thursday, largely ignored by Sunni Arab states, approved a resolution calling for an end to the Syrian regime's crackdown on dissent, for the opposition to unite and for parties to the conflict to launch a "serious national dialogue."

Syria's opposition had urged a harsher statement backing hardliners Qatar and Saudi Arabia, who have called for President Bashar Assad to step down and for rebels opposing his regime to be supplied with arms.

Iraqi Prime Minister Nouri al-Maliki however steered the summit away from this option, saying that arming either side of the conflict "will lead to a regional and international proxy war in Syria."

Activists in Syria have for more than a year staged anti-regime protests each Friday after the main Muslim prayers, which have been violently put down by Assad's forces.

The United Nations says more than 9,000 people have died in the revolt, which many fear has brought Syria to the verge of civil war.

They thought if they helped you, their turn would be next. So they preferred the status quo.