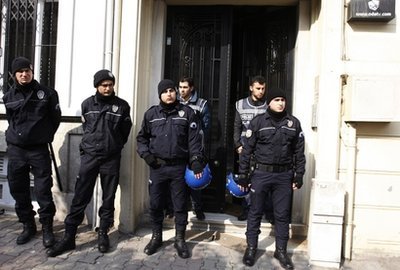 Turkish police on Thursday raided the homes of several people, including journalists and a former intelligence officer, as part of a crackdown on an alleged secularist network accused of conspiring to topple the Islamic-rooted government.

The raids come two weeks after a court jailed three journalists of a dissident website Oda TV in the case. Critics say press freedom is under attack in the country and the United States has expressed concern over media freedom. But Prime Minister Recep Tayyip Erdogan has denied any government attempt to silence journalists.

The European Union and the Committee of Protect Journalists have accused Turkey of suppressing critical news and commentary on the alleged anti-government conspiracy.

About 400 people, including journalists, politicians, academics and retired military officers are on trial accused of being part of the so-called Ergenekon network, which allegedly tried to overthrow Erdogan's government in 2003.

Police were searching computers, notes and books of the journalists, including Ahmet Sik who already faces prosecution for co-writing a critical book about the crackdown on the so-called Ergenekon network, NTV television said.

Police had reportedly discovered a draft book by Sik that allegedly focuses on the religious groupings within the police force on the hard disk of one computer seized in last month's raid on Oda TV, several news websites said.

Nedim Sener, an investigative reporter for Milliyet and Posta newspapers, and Dogan Yurdakul who occasionally writes for Oda TV, were among the targeted journalists along with a renowned hardline secularist and leftist writer Yalcin Kucuk, NTV said.