Tons of Explosives Seized from Militants Planning Attack in Kabul 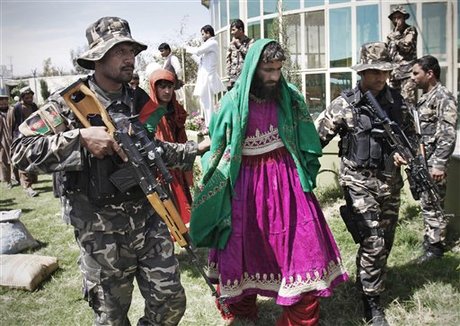 Afghan security forces have arrested five militants with 10 metric tons (11 tons) of explosives that they planned to use to carry out a massive attack in Kabul, a security official said Saturday.

Shafiqullah Tahiry, who is a spokesman for the National Director for Security, told a news conference that three of the men were Pakistanis and two were Afghans.

He did not say when the arrests took place, nor what their intended target was.

Tahiry said the explosives were brought from Pakistan to Kabul and that three of the men were members of the Pakistani Taliban, while the other two belonged to the Afghan Taliban. He said they were taking orders from two Pakistani Taliban commanders who he claimed have ties to that country's intelligence agency.

"Imagine if 10,000 kilograms of explosives, which was already inside Kabul" had exploded, "what a disaster could have happened," Tahiry said.

Militants reportedly from a Pakistan-based group launched coordinated assaults last week in the Afghan capital and other eastern cities.

Afghan and U.S. officials have blamed those attacks on the Haqqani network, an insurgent group that is allied with the Taliban and al-Qaida and has been described by American officials as the most dangerous militant force in the Afghan war.

Last Sunday's coordinated assaults included near-simultaneous attacks in the three parts of the capital and three other eastern cities. Eight policemen and three civilians were killed in 18 hours of fighting, along with 36 militants, according to Afghan officials.

Tahiry said the captured explosives were in 400 bags and hidden under potatoes loaded in a truck with Pakistani license plates.

According to Tahiry, the men confessed that they "had planned to carry out a terrorist attack in a key point in Kabul city."

Proud to Afghan security forces and death to ISI as well as president karzai dissident brothers.

Proud to our brother who sucrifies thier blood for the sake of our country. death to those who support and has sympathy with Karzai's brothers (TALIBAN/ISI).