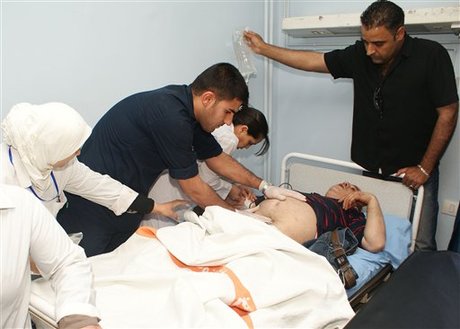 Syrian forces Tuesday swept through a village in Idlib province, firing shells and bursts of gunfire in which two civilians were killed, while another man was shot dead by snipers in Homs, a watchdog said.

The northwestern Idlib province, which borders Turkey, is a stronghold of the Free Syrian Army and a hotbed of opposition to President Bashar Assad's regime.

Another civilian died by sniper fire in the central city of Homs, Abdel Rahman said, adding that he was gunned down at a security checkpoint in the neighborhood of Qusayr.

Raids by security forces and clashes between regular troops and defectors saw 17 civilians, three rebels and five soldiers killed on Monday, when Syria held parliamentary elections that the opposition boycotted and Washington dismissed as "ludicrous."

Political analysts do not expect the election to lead to significant change in Syria, where a tenuous U.N.-backed ceasefire that came into effect on April 12 has failed to take hold.

More than 600 people have died since the truce began, according to the Observatory.