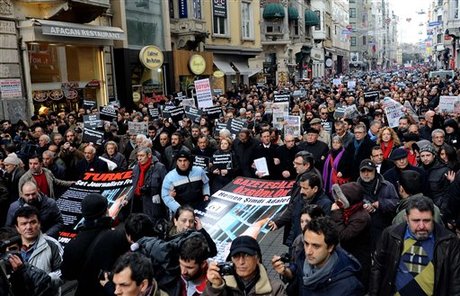 Thousands of Turkish journalists took to the streets here on Sunday demanding the release of colleagues in prison and raising the issue of press freedom.

Journalists supported by activists, intellectuals, and some opposition parties marched in central Istanbul.

Some carried banners that read "Freedom to journalists", "No to wire tapping," and "Justice right now," an Agence France Presse photographer reported.

The photographs of arrested colleagues and murdered journalists were carried along side newspapers with headlines on press freedom.

People came from nearby cities to Istanbul to attend the demonstration, news channel NTV reported.

Early this month more journalists were arrested and charged for plotting against the Islamist-rooted government in the latest wave of detentions, fuelling concerns over media freedom in the EU-aspirant country.

It was the latest move in a sprawling probe into Ergenekon, purported secularists network that allegedly planned assassinations and bombings to spark chaos and prompt a military coup to topple the Justice and Development Party (AKP) government.

Among those arrested was Nedim Sener, a prominent journalist who last year received the International Press Institute's World Press Freedom Hero award for a book that blamed the security forces for the 2007 murder of ethnic Armenian journalist Hrant Dink.

Ironically, journalist Ahmet Sik, also among the suspects, is credited with being among the first journalists to report that some generals were plotting to oust the government, months before the probe began in June 2007.

But President Abdullah Gul has said he was "worried" about the latest developments as they cast a pall over Turkey's reputation overseas.

Critics charge that the Ergenekon investigation, launched in 2007, has degenerated into a campaign to bully critical media and the opposition.

Media associations said 68 journalists were under arrest, conflicting with Erdogan's statements that 27 were in jail and none of them were charged for journalistic work.

The latest arrests of six journalists followed a similar operation last month against an opposition website that drew US criticism.

The European Parliament in a resolution on March 9 also criticized Turkey for deteriorating freedom of the press.