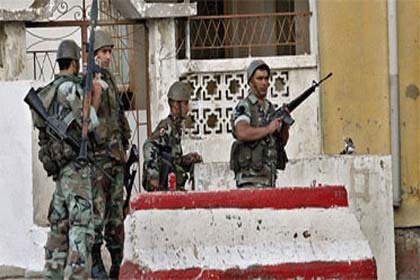 The whereabouts of the six militants who had escaped the Ain el-Hilweh Palestinian refugee camp remains unknown, reported al-Joumhouria newspaper on Friday.

It said that it is likely that they headed to the northern city of Tripoli before heading to Syria to take part in the revolt against the country’s ruling regime.

Taha’s escape is yet to be verified.

The Army Command later issued a statement on Friday announcing that it had intensified its presence around Ain el-Hilweh amid reports of the militants’ escape, adding that it had set up checkpoints in various regions to follow up on the matter.

Al-Joumhouria added that Abou Niaaj, a prominent member of al-Qaida, received the order to leave the camp directly from the organization through the internet.

He was reportedly ordered to head to Tripoli in preparation to traveling to Syria to carry out “special operations.”

A security source confirmed the escape to As Safir newspaper on Friday, saying that the militants are in fact heading to Syria.

He revealed that they “had written their wills and handed them to their families or superiors before leaving the camp.”

A widely informed source told the newspaper that the escape may be linked to the various reports on the infiltration of terrorist groups into Lebanon recently and which are seeking to carry out assassinations against various political leaders.

Palestinian sources told the Central News Agency on Thursday that the Palestinian leaderships are vigilant over any emergency development and contacts are ongoing between the various factions and Lebanese security agencies.

Meanwhile, the Lebanese army discovered overnight a booby-trapped car as it was leaving Ain el-Hilweh, while the Army Command said that the car was loaded with weapons.

A security authority told As Safire newspaper in remarks published on Friday that the driver was going to deliver the car to a side that was seeking to “use it against a very sensitive target.”

The Army Command statement explained that the car loaded with weapons was headed to an undisclosed location in Lebanon, it stated.

The driver and individual, who was awaiting the vehicle, have since been detained, said the army.

Investigations are underway to determine the details of the incident, it added.

Very good news...those Fatah el islam were sent by the Syrian regime and now they are going back to him..why should we be upset? Let the syrian regime get a taste of its own medicine..I would definitely encourage all of them to go back there

It is time to clean up all these camps once and for all!!!

The sooner the better, and the more we delay the costlier it will be....

Good news, let them all end up in Syria. This is all karma for Syrian government arming terrorist groups, militants and Palestinian 'freedom fighters' in Lebanon, ruining the country for decades. Let the Syrian government get a taste of its own medicine.