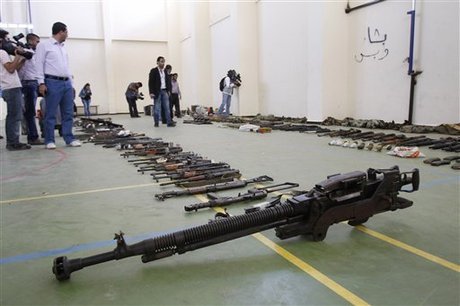 Iran is using commercial aircraft to smuggle weapons and explosives to Syria and Hizbullah in Lebanon, the German broadcaster ZDF reported Wednesday.

The mastermind behind the operation is Iran’s Revolutionary Guards, which supports the regime of President Bashar Assad and the Lebanese party, the sources told ZDF.

According to the broadcaster, Turkish security officials found weapons and explosives on board a Yas Air passenger jet in March last year.

The freight was allegedly being shipped to Damascus.

Britain’s Guardian newspaper reported on Monday that a senior commander in the Revolutionary Guards has admitted that Iranian forces are operating in Syria in support of the regime.

Ismail Gha'ani, the deputy head of Iran's Quds force, the arm of the Revolutionary Guards tasked with overseas operations, said in an interview with the semi-official Isna news agency: "If the Islamic republic was not present in Syria, the massacre of people would have happened on a much larger scale."

Isna published the interview at the weekend but subsequently removed it from its website.

ummm...duh!!! This just made news now?!?! WTF! I thought it was an open secret. This has been happening since at least 2001. I witnessed it several times myself when I used to travel to and from Iran. Especially when via Damascus. I remember Iran Air stopped coming to Beirut after a while.

Wondering what this piece of ZDF's is about.

Is it about weapons? Which is no news at all, but rather common knowledge in Lebanon and Syria.

Or is it about flight safety? The report also goes into detail about possibly unsafe Iranian passengers machines due to the 30 years long embargo imposed on the country.

The reports shows more misunderstanding of the whole situation by western media than usual. And that is not an easy call

Cant we just skip all this crap and have normal countries? Can´t we have airports where they stop us because we have banned medicine in our bag? Instead of a Bazooka.

I would like to have a country, where "renting" a sportshall is expensive because it´s so popular, not because they are storing weapons there ( the picture).

rudes, the VAST majority is, so yes...

you know I have been just reading for a while & refraining from answering the low life scum bag of FT's comments in here indeed he is the same looser mama's boy lover boy whatever the heck it is. go back to Iran you farsi Arsehole

How come the US didn't shoot them down like when they shot flight 665 mistaking it for a jet fighter and killing 290 people. Mistakes happen you know.