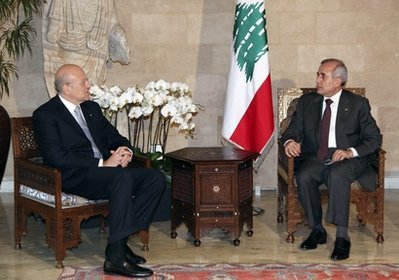 President Michel Suleiman condemned on Saturday the attack on the Lebanese Embassy in Libya and the burning of the Lebanese flag.

He said: "It is a blatant attack on Lebanon's sovereignty."

The president urged caretaker Foreign Minister Ali Shami to file an urgent complaint to the United Nations in protest to the "blatant" violation of international law and the Vienna Convention on diplomatic relations.

"I assure that there are no injuries among the embassy employees," he said.

The ministry described the attack as a "blatant violation" of the embassy's diplomatic immunity and the stipulations of the Vienna Convention on diplomatic relations.

It slammed "the Libyan regime's disdain of international conventions and laws."

"This attack came after the efforts exerted by Lebanon – as the representative of the Arab bloc on the U.N. Security Council and under the mandate granted to it by the resolution of the Arab League's ministerial meeting – led to passing Security Council resolutions 1970 and 1973, whose implementation will lead to protecting civilians in Libya from the systematic violence practiced by the Gadhafi regime," Shami said, for his part.

On a separate note, Lebanon's permanent mission to the U.N. filed a complaint against Israel with the Security Council over the Jewish state's planting of spy devices in the southern town of Shamaa, which is part of UNIFIL's area of deployment.

"It also represents an act of aggression against Lebanese territory and confirms once again Israel's disdain of U.N. resolutions and the UNIFIL force," the ministry added.

According to a statement issued by the ministry, Lebanon has called on the Security Council to shoulder its responsibilities in maintaining international peace and security and to pressure Israel into quitting its hostile and provocative policies against Lebanon.