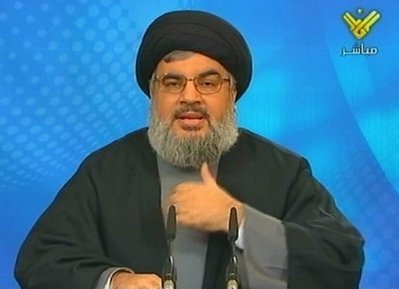 Hizbullah Secretary-General Sayyed Hassan Nasrallah on Saturday stressed that "all this uproar" in Lebanon over his party's arsenal of weapons "will not affect the performance of the Resistance which will carry on with training and arming" its fighters.

"We have to deal calmly with everything being said, as the Resistance's arsenal of weapons is fine and it will always be pointed at the (Israeli) enemy, but let no one try to harass us," Nasrallah added.

In a televised address during a rally organized by Hizbullah in Beirut Southern Suburbs in solidarity with the uprisings in the Arab world, Nasrallah noted that the rally organized by the rival March 14 camp to commemorate the 6th anniversary of the Cedar Revolution "went on without any violent incident."

"This proves that their allegations are false and that no weapons are pointed at anyone's head," Hizbullah number one added.

"Alongside the army and the Internal Security Forces, the Resistance remained watchful throughout the night to protect the security of those who were cursing it," he noted.

As to political rhetoric at the March 13 rally, Nasrallah said: "We didn't hear anything new to comment."

He stressed that Hizbullah will not be "dragged into any debates, but if they have anything new we will respect it and discuss it."

"Should Israel threaten any Lebanese government that decides in the future to start oil excavation off the southern coast, only the Resistance would force Israel and the world to respect Lebanon's right," Nasrallah vowed.

"How would we defend our oil and gas? Through poetry and neckties?" he added, slamming the March 13 speeches of Lebanese Forces leader Samir Geagea and caretaker Prime Minister Saad Hariri, who took off his jacket and necktie and rolled up his shirtsleeves as he addressed supporters gathered at Beirut's Martyrs Square.

Addressing the anticipated indictment of the U.N.-backed Special Tribunal for Lebanon, Nasrallah said: "We consider it already released and no Sunni-Shiite strife will erupt in Lebanon because of it."

The tribunal -- tasked with investigating the 2005 murder of ex-PM Rafik Hariri -- is reportedly readying to implicate members of Hizbullah in the killing.

As to the process of forming a new cabinet in Lebanon following the January felling of Saad Hariri's government by Hizbullah and its allies over a long-running dispute over the STL, Nasrallah said that "despite the pressures, the (new) majority will form a new cabinet headed by PM Najib Miqati."

On the other hand, Nasrallah said that Arab rulers cracking down on protesters should listen to their people before it is too late.

He stressed that the blood of the people will eventually force their regimes to grant them greater rights.

"We tell the Arab peoples 'we are with you and we are ready to help you.'"

"The Lebanon of resistance calls on Arab peoples to be patient, steadfast and confident of victory. God will grant you victory if you persist in your jihad," Nasrallah added.

He said that Arab revolutions were started by "enthusiastic youths who were later joined by the political elite and leaders."

"A people willing to offer this level of sacrifices cannot be defeated by the U.S., Israel or anyone in this region," he vowed.

"We will reevaluate our stance on the United States' policies when it changes its stance on Palestine," Nasrallah said of Washington's stances on the Arab uprisings.

He called on the peoples of the Arab nations not to be "fooled by the U.S. deceit and hypocrisy."

"Our peoples have become aware of the U.S. policies and they know that the toppled regimes had been backed by the U.S. for tens of years," he added.

Nasrallah noted that foreign military intervention in Libya might make the North African country "a victim of the game of nations."

"That's why we urge (Libyan) rebels there to be vigilant and from the Lebanon of resistance we send our salutations to all jihadist fighters in Libya," he added.

Addressing the situation in Bahrain, Nasrallah said Gulf countries sent troops into Bahrain to "defend a regime which no one is threatening to topple."

"The opposition in Bahrain is purely peaceful and yet Arab armies are being summoned to confront it. This is a bizarre paradox.

"I ask some in the Arab and Islamic worlds: Why have you remained mum over the tyranny against our people in Bahrain, is it only because they are Shiites?" Nasrallah wondered.