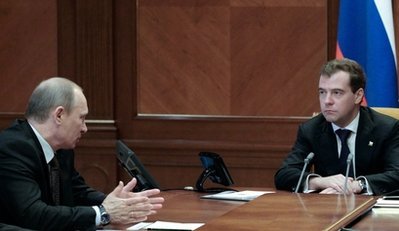 Russian President Dmitry Medvedev on Monday slammed Prime Minister Vladimir Putin's comments on military action against Libya as "unacceptable", in the most public clash yet between Russia's ruling tandem.

Putin earlier Monday denounced the U.N. resolution allowing military action on Libya as resembling a "medieval call to crusade", in one of his most virulent diatribes against the West in years.

"Under no circumstances is it acceptable to use expressions which essentially lead to a clash of civilizations. Such as 'crusade' and so on," Russian news agencies quoted Medvedev as saying.

"It is unacceptable. Otherwise, everything may end up much worse compared to what's going on now. Everyone should remember that."

Medvedev took over the Kremlin in 2008 after Putin served two four-year terms as president. Putin immediately became a powerful prime minister and until now the two men have steered clear of clashes in public.

Putin said there was no "logic" or "conscience" to the military action against Libya.

"The resolution by the Security Council, of course, is defective and flawed," Putin told workers on a visit to a missile factory in the central Russian region of Udmurtia.

"To me, it resembles some sort of medieval call to crusade when someone would appeal to someone to go to a certain place and free something there," he said in televised remarks.

Putin's comments marked a sharp hardening of Moscow's rhetoric against the Western military action on Libya after Russia abstained from the U.N. resolution last week, refusing to use its veto which would have blocked its passage.

The Russian prime minister also lashed out at the "steady trend" of U.S. military intervention around the world, accusing Washington of acting without conscience.

"I am concerned about the ease with which the decision to use force was taken," Putin was quoted as saying in reference to the current international campaign in Libya.

Noting that the United States had already involved itself in the former Yugoslavia, Afghanistan and Iraq, Putin added: "Now it's Libya's turn.

"And all of this under the guise of protecting peaceful civilians. Where is the logic, where is the conscience? There is neither one nor the other," Putin said.

He did not elaborate over why Russia had abstained in the resolution vote when it was so staunchly opposed to the text.

Putin added that the events in Libya showed that Russia had taken the right decision in strengthening its military capabilities, in possible reference to its massive new $650 billion rearmament plan.

"Today's events in Libya prove that we are doing everything right in terms of strengthening Russia's military capabilities," he said.

He also announced that Russia planned to double the production of strategic and tactical missile systems from 2013.

Russian air-defense troops would also receive the S-400, an advanced surface-to-air missile system, as part of a current army overhaul, Putin was quoted as saying.

Putin's hardline comments sit awkwardly with the reset in U.S.-Russia ties championed by his successor in the Kremlin, Medvedev, which has seen a swift warming of relations over the last months.

However, conspicuously, there was no scheduled meeting with Putin for Gates' visit.

Observers have long speculated that the U.S. favors Medvedev over Putin. Some reports even suggested that U.S. Vice President Joe Biden wanted to warn Putin against considering a return to the Kremlin in 2012 polls, on his visit to Russia this month.

Russia had initially backed international measures against the Gadhafi regime, signing on to U.N. Security Council sanctions that imposed an arms embargo against Libya and other sanctions against Gadhafi's family.

Some Russian defense officials had initially expressed concern about the sanctions, saying the U.N. arms export prohibition may cost the country some $4 billion in current and future contracts.