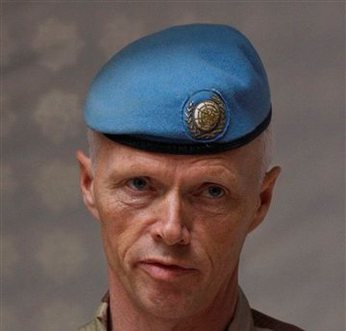 U.N. observers suspended their mission to Syria on Saturday, blaming intensifying violence as troops reportedly rained shells down on rebel strongholds, trapping more than 1,000 families in one city alone.

The unarmed observers have been targeted almost daily since deploying in mid-April to monitor a U.N.-backed but widely ignored ceasefire, and they were likened to "sitting ducks in a shooting gallery" by Susan Rice, the U.S. envoy to the United Nations.

Explaining the decision, mission head Major General Robert Mood spoke of an escalation in fighting and of the risk to his 300-strong team, as well as the "lack of willingness" for peace by the warring parties.

"There has been an intensification of armed violence across Syria over the past 10 days," General Mood said in a statement.

"The lack of willingness by the parties to seek a peaceful transition, and the push towards advancing military positions is increasing the losses on both sides: innocent civilians, men women and children are being killed every day.

"It is also posing significant risks to our observers.

The observers "will not conduct patrols and will stay in their locations until further notice," he said, adding that "engagement with the parties will be restricted."

Mood said the suspension would be reviewed daily, and that "operations will resume when we see the situation fit for us to carry out our mandated activities."

More than 14,400 people have been killed since the uprising against President Bashar Assad's regime erupted in mid-March 2011, according to the Britain-based watchdog.

Meanwhile, the Syrian foreign ministry said it "understands" the decision of the U.N. observers' mission head to suspend work in the country, saying "terrorist groups" were threatening its members.

"The ministry understands the decisions taken by General Robert Mood, particularly those related to preserving the safety of observers," the official SANA news agency reported, referring to the head of the U.N. mission.

The report said that the ministry was "notified" on Friday night by General Mood of his decision to "temporarily reduce the work of observers because of what he called the escalation of violence targeting them."

"The armed terrorist groups have intensified their criminal operations, especially those against UN observers, and are threatening their lives" since Syria agreed to the terms of international envoy Kofi Annan's peace plan, the ministry said.

The foreign ministry accused Arab and international groups of "providing terrorists with sophisticated weapons and communication equipment to help commit their crimes and defy the United Nations."

They suspended it in observance for the passing of Prince Nayef, the mastermind of the Syrian crisis. Too bad the crisis got him first.

Stop wasting time and start saving lives all these poor Syrian people are being killed everyday and the rest of the world is watching .

What a waste of time? Giving people false hopes, and the regime encouragement for killing more.

violence in syria will continue as there is not an international understanding between the major powers.. that's why in lebanon there is no risk of confrontation as long as there is an accord between international powers to keep it calm.
but there is an inclination in iran to do the "great deal" with the west which include afghanistan iraq bahrein syria and hizbollah.. in the meantime we have to survive in lebanon the bad economic time

There is only one country responsible for the ongoing bloodshed in Syria: Russia. Another dictatorship.

Arm the rebels, start chapter 7, whatever.....just do what is necessary. ASSad has delayed and lied long enough.

America, The Saudis, the Qataris, Kuwait and France should be punished before the International Criminal caught for aiding and abetting Islamists and Terrorists in Syria. America has admitted to providing these terrorists with Telecommunications and the Saudi Family in Arabia along with the Qataris have admitted to providing Arms. The Lebanese State has caught arms trying to get through to Syria.

This will one will be very tough without external involvement, it's a matter of existence but in the end the west will corner Iran from all sides.