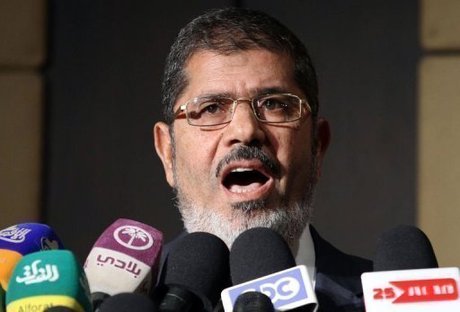 Egypt's Islamist president-elect, Mohammed Mursi, has pledged to strengthen ties with Iran to build a "strategic balance in the region," according to an interview excerpt given by Iran's Fars news agency on Monday.

"Part of my agenda is the development of ties between Iran and Egypt that will create a strategic balance in the region," Mursi, who comes from Egypt's long-repressed Muslim Brotherhood, was quoted as saying.

Fars, which is close to Iran's powerful Revolutionary Guards, said the full interview would be published later.

It said Mursi spoke with a Fars reporter in Cairo on Sunday before results were released giving him victory in the election to be Egypt's next president.

Although Mursi resigned from the Muslim Brotherhood to take the top job, Israel is wary of his election, fearing his Islamist record could jeopardize its three-decade peace deal with its huge neighbor.

Any tie-up between Egypt and Iran would alarm Israel and its ally the United States.

Iran's foreign ministry on Sunday welcomed Mursi's triumph. Its message made no mention, however, of Iran and Egypt resuming diplomatic ties that have been cut since 1980, the year after Cairo signed its peace agreement with Tel Aviv.

Iran's clerical leadership contends that the Arab Spring that toppled veteran Egyptian strongman Hosni Mubarak and other longtime U.S. allies in the Arab world last year was inspired by its own 1979 Islamic revolution.

Although Iran's predominant faith is Shiite Islam and the Muslim Brotherhood adheres to the Sunni branch of Islam, Tehran has been reaching out to the organization in Egypt in recent months.

Iran's armed forces chief of staff, General Hassan Firouzabadi, on Monday was quoted by IRNA echoing the Muslim Brotherhood's rejection of moves by Egypt's military to dissolve the Islamist-led parliament and to give itself greater say over government policy and the constitution.

"The actions of the military council in Egypt, which considers itself to be selected by Mubarak, lack legal validity and political legitimacy," Firouzabadi said.

If he kan and if he gets the chances ,He surely make a estraegical pact with Iran and Hezbollah. But he must first wear as the Egyptian peresident in Supreme Constitutional Court, The court that has disolved THe Brotherhood dominant palament

Another Iranian dog emerges! That's all we need!

Good relations with Iran? What the f...? Dr. Geagea, are you sure these are your friends? Is it another one of your disastrous mistakes?

Give the guy a chance. The interview was before result were annouced. What is he suppose to say "I am going to war with Iran". Let see how he does in the first 100 days.