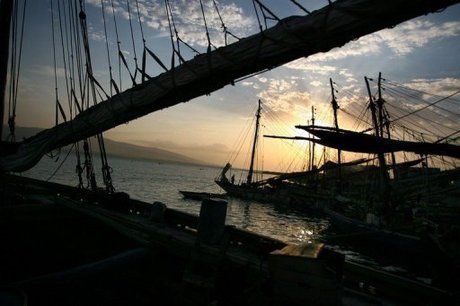 Fifty-four migrants trying to reach Italy died of thirst when their inflatable boat ruptured in the Mediterranean, according to testimony from the sole survivor, the U.N. refugee agency said.

The rescued man, who drank sea water to survive, was spotted clinging to a jerry can and the remains of the stricken boat off the Tunisian coast on Monday night by fishermen who alerted the coast guard, the UNHCR said.

In his account of the 15-day ordeal, the man from Eritrea said 55 people boarded the boat in the Libyan capital Tripoli in late June and reached the Italian coast a day later.

But high winds forced the vessel back out to sea and within a few days the boat had punctured and air started to leak out, the man told the U.N. High Commissioner for Refugees (UNHCR)

The man, who is being treated in a Tunisian hospital for exposure and dehydration, said there was no fresh water on board and people started to perish within days, many drinking sea water in a vain attempt to survive.

He said more than half of the victims were from Eritrea, including three of his relatives.

"This is a tragedy," said T. Alexander Aleinikoff, Deputy High Commissioner for Refugees. "I call upon all vessels at sea to be on heightened alert for migrants and refugees needing rescue in the Mediterranean."

The agency estimates that 170 people have been declared dead or lost at sea attempting to make the journey from Libya to Europe so far this year.