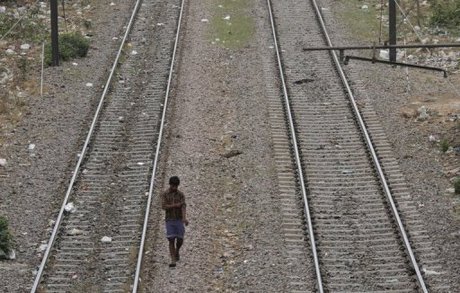 At least 32 people were killed Monday when a fire ripped through a coach on a speeding express train as it carried sleeping passengers to the southern Indian city of Chennai, officials said.

The accident, on a long-distance service from New Delhi, occurred in the early hours of the morning near the town of Nellore in Andhra Pradesh state.

"Thirty-two (bodies) have been pulled out from the coach," Madhusudan Sarma, a senior administrative officer in Nellore district, told Agence France Presse, adding that there were still more corpses inside.

Another 26 people have been admitted to hospital, he added.

One coach was completely gutted, and rescuers were struggling with the fierce temperatures inside the mostly metal carriage. Gas cutters were being used to cut open wider access for the emergency services.

Images of the crash showed thick black smoke still pouring out of the charred carriage as dawn broke over the accident scene.

Dozens of rescuers, survivors and crowds of onlookers milled around as the blackened and twisted bodies of victims were lifted out of the wrecked carriage and laid in rows alongside the railway line.

Family members of the victims wailed and screamed, while other dazed survivors sat around quietly with their belongings.

Nellore chief district official B. Sreedhar said preliminary investigations suggested a short circuit near a toilet had triggered the blaze.

"We expect the death toll in the affected coach to be around 30 to 35 people," Sreedhar told NDTV television.

Some 26 passengers managed to escape the burning carriage which would normally carry around 70 people.

"The fire spread fast and blocked the door at one end of the coach, so there was only one exit available," Sreedhar said.

The non-stop train was travelling at 110 kilometers an hour (70mph) when it passed through Nellore station, where staff noticed the fire and informed the railway authorities.

India's accident-prone rail network is still the main form of long-distance travel in the huge country, despite fierce competition from private airlines.

There were two fatal accidents this May alone, including a collision that killed 25 people near the southern city of Bangalore. Four passengers also died after a train derailed in the northern state of Uttar Pradesh.

In March, the then railway minister Dinesh Trivedi unveiled a draft budget for 2012-13 that included a major safety upgrade which would be financed by across-the-board fare hikes.

But he was forced to withdraw it and resign after a rebellion from his own populist party, the Trinamool Congress, which objected to increasing ticket prices for the poorest travellers.

The National Crime Records Bureau, which gathers the causes of fatalities across India, says 25,705 people in total died on the railways in 2009, including pedestrians hit by trains and others who were killed on unprotected crossings.

India's worst rail accident was in 1981 when a train plunged into a river in the eastern state of Bihar, killing an estimated 800 people.