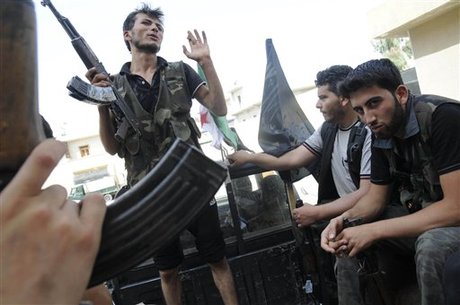 Government forces on Monday strafed rebel-held districts in Aleppo with helicopter gunships and pounded them with shelling on the third day of a pitched battle for Syria's commercial capital.

The fighting has sent some 200,000 civilians fleeing the northern city, according to the U.N., which warned of a looming humanitarian catastrophe, while France said it would call an urgent U.N. Security Council meeting on Syria.

The head of the U.N. observer mission inside Syria said he personally had witnessed heavy shelling of Homs, Syria's third largest city, on a field visit on Sunday during which U.N. chief Ban Ki-moon said the convoy came under small-arms fire by unknown assailants.

The army's offensive in Aleppo was focused on Salaheddin district in the southwest, a stronghold of the rebel Free Syrian Army, said the Syrian Revolution General Commission.

The army said later that it had overrun Salaheddin, although the rebels denied the claim.

Colonel Abdel Jabbar al-Oqaidi, head of the Free Syrian Army military council for Aleppo, insisted government troops had "not progressed one meter (yard)," and that the rebels still controlled "between 35 and 40 percent of Aleppo."

Inside the embattled district, whole streets and buildings were damaged, and electricity cables dangled between them, an Agence France Presse correspondent reported.

While battles raged nearby, about 200 people waited in a queue to buy their daily bread from a rebel-controlled bakery.

Just outside of Aleppo, rebels seized a strategic checkpoint after a 10-hour battle, another AFP correspondent reported.

By securing the checkpoint, about five kilometers (3.8 miles) northwest of Aleppo, the rebels now control a direct route between the Turkish border and the commercial capital.

The Syrian Observatory for human Rights said the rebels had been able to make use of the captured armor. "Rebels used a tank they had captured from the army to target the military airport," the Britain-based watchdog said.

U.N. mission chief Lieutenant General Babacar Gaye said he was "deeply concerned about the ongoing violence from both sides in Aleppo."

"My observers there have reported an upsurge in the violence, with helicopters, tanks and artillery being used," the Senegalese general said.

"It is imperative that both sides respect international humanitarian law and protect civilians."

Gaye said that during his trip to Homs province on Sunday -- his first field visit since taking over the mission earlier this month -- he had seen heavy shelling in Homs and extensive damage in the battleground town of Rastan.

"There were damaged tanks left on the side of the streets, public infrastructure, such as bridges, was destroyed, and homes on the main roads inside the town were largely damaged," he said.

The five-vehicle convoy which was carrying Gaye came under small arms fire near Homs, a U.N. peacekeeping spokeswoman said.

"Fortunately there were no injuries," the U.N. chief told reporters.

U.N. officials said it was not known who had fired the shots.

There was renewed fighting in Homs province on Monday, in which the Syrian Observatory reported five rebel fighters and four civilians killed.

They were among 41 people the watchdog was able to confirm killed nationwide, although it admitted it had no immediate accurate figures for Aleppo.

U.N. humanitarian chief Valerie Amos said an estimated 200,000 people had fled from Aleppo in two days and that an unknown number were still trapped in the city.

Amos said many people in Aleppo had sought shelter in schools and other public buildings. "They urgently need food, mattresses and blankets, hygiene supplies and drinking water," she said.

U.S. Defense Secretary Leon Panetta warned Syrian President Bashar al-Assad that the assault on his own population in Aleppo would be a nail in his coffin.

"It's pretty clear that Aleppo is another tragic example of the kind of indiscriminate violence that the Assad regime has committed against its own people," Panetta told reporters.

"If they continue this kind of tragic attack on their own people in Aleppo, I think ultimately it will be a nail in Assad's coffin," he said.

Syria's top diplomat in London Khaled al-Ayoubi resigned in protest against the "violent and oppressive" actions of the Assad regime, the British Foreign Office said.

It was the latest blow to the Damascus government after a series of defections of diplomats and senior army officers in recent weeks.

More than 20,000 people have been killed in Syria since the anti-Assad revolt began in March 2011, according to the Observatory. There is no way to independently verify the figure, while the U.N. has stopped keeping count.

Victory in near boys keep fighting Assad and his gang of thugs..

Silly bashar it's Zahleh all over again.

now u care about moderate sunnis? anyway late better than never...perhaps its not too late.

as opposed to Iran which claims it supports the "resistance" but has never shed a drop of blood. Turkey at least has lost a few people supporting the Palestinians (boat thing)--Iran is just full of hot air and loves to use proxies instead of doing the deeds itself.