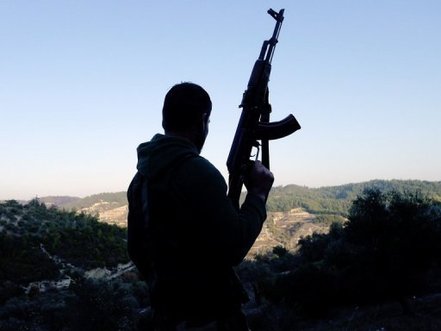 Syria's rebels distributed on Monday a "national salvation draft" proposal for a political transition in the country, bringing together military and civilian figures for a post-Bashar Assad phase.

The draft by the joint command of the Free Syrian Army (FSA) proposes the establishment of a higher defense council charged with creating a presidential council, which in turn would bring together a total of six military and civilian figures to lead a future transition.

The proposal "meets all the revolution's demands," said the umbrella Military Council Joint Command, based in the central province of Homs.

When Syria's uprising first turned into an armed insurgency, various factions of fighters generally had little or no coordination with each other as they separately battled President Assad's forces.

This has changed with time, with the Joint Command, headed by Colonel Kassem Saadeddine, emerging as an increasingly representative coordination body for the FSA inside Syria.

Officially, the FSA is under the command of defected Colonel Riad Assaad, who is based in Turkey. However, FSA commanders inside Syria have frequently said they would not take orders from a leader based outside the strife-torn country.

The transition-phase higher defense council should include "all Military Council leaders in Syria's cities and provinces, as well as all the high-profile defected officers and others who have contributed to the revolution," the Joint Command statement said.

Among the proposed presidential council's responsibilities would be "to put forward draft laws for referendum and (...) to restructure the security and military apparatus," the statement said.

The FSA also envisaged "the development of solutions for civilians who took up arms during the revolution," adding that they "could be incorporated in new security and military institutions."

The transition would also feature the "establishment of a higher national council to protect the Syrian revolution," whose role would be to "monitor the work of the executive."

Alongside all major opposition forces -- including activist networks the Syrian Revolution General Commission and the Local Coordination Committees -- the FSA and the new national council should participate "in the creation of new institutions," the statement said.

In the transition, the FSA should head both the interior and defense ministries, according to the draft. "The minister of presidential affairs should be a civilian appointed by the revolution's military wing," the statement added.

The draft aims to take Syria through "a safe and balanced transition period," the FSA said, describing it as a "road map that can be accepted by all parties on the path to liberation and independence, and the building of a new Syria."

The FSA also warned that "any government that is created anywhere... that lacks national and revolutionary legitimacy, that does not fully meet all the demands of the revolution, and that lacks the approval of the Joint Command and all the revolutionary forces on the ground, will not see the light."

Who cares ya jabalm as long as Assad is gone buddy.