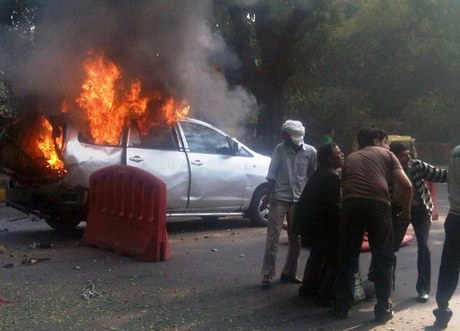 Indian police have charged a journalist with conspiring to carry out a bomb attack on an Israeli diplomat in New Delhi in February, a senior police official told Agence France Presse Wednesday.

Syed Kazmi, a freelance journalist who worked part-time with Iran's IRNA news agency, is accused of helping a group of Iranians to plan and execute the attack which saw a man on a motorbike attach a magnetic bomb to an Israeli embassy car.

"We charged Syed Kazmi yesterday under the prevention of unlawful activities act. He has been charged with planning and conspiracy in the February attack," said anti-terrorism official Ashok Chand, who is supervising the investigation.

Kazmi is the only person to be charged in India in connection with the bombing.

A 42-year-old Israeli diplomat, the wife of the defense attaché at the embassy, was badly wounded in the explosion near the prime minister's residence in the center of the Indian capital.

A report in the Times of India newspaper on Monday said Delhi police had informed Iran that the plotters were members of the country's powerful Revolutionary Guards, a branch of the military.

Delhi police, however, later denied the report, stressing that it had only asked Tehran for "the details of six persons of Iranian origin suspected to be involved".

Interpol issued international arrest warrants for four of the suspects named in the report in March.

The main plotters were believed by police to have entered India on tourist visas and left after the attack, which Israel immediately blamed on Iran.

Analysts speculated that Tehran was retaliating for a series of attacks on Iranian nuclear scientists which have been blamed on the Israeli secret service Mossad.

But India has held back from officially apportioning any responsibility.

Prime Minister Manmohan Singh will attend a Non-Aligned Movement summit in Iran between August 26-31 and is expected to hold talks with President Mahmoud Ahmadinejad.

"We are working out the possibility for a bilateral meet," an Indian government official told AFP on Wednesday.

India has traditionally enjoyed warm relations with Iran and, along with China, is among the biggest buyers of Iranian oil.

India announced in May that it would cut Iranian crude imports by 11 percent, earning a sanctions waiver from the United States which has sought to pressure countries into isolating Iran commercially and diplomatically over its disputed nuclear program.