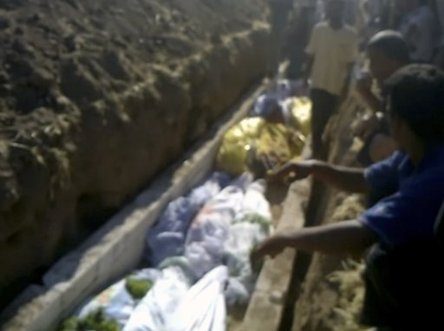 Syria's exiled opposition accused the government on Monday of killing 40 people in a massacre in a central town in a bid to terrorize people into flight to change the confessional balance of the region.

The Syrian National Council said that a further 120 people were wounded in the attack by troops and militia on Harbnafsa, in Hama province, a town of some 8,000 inhabitants.

"Regime forces bombarded the town... with tanks and heavy weapons for five hours straight," the SNC said. "They then stormed the town."

The group said the government's "criminality and desire to commit murder and instill terror has reached such a point that the military and security services, as well as the shabiha (loyalist militia) from nearby... villages, chased fleeing townspeople with knives and live ammunition."

Condemning what it described as a "barbaric massacre," the SNC said the killings were a result of "a clear policy of displacement."

Rural areas of Hama province have suffered a series of massacres in recent months, frequently involving pro-government militia, according to opposition activists and human rights monitors.

The province is confessionally mixed, with some areas Sunni Muslim and others made up of members of the minority Alawite community of President Bashar Assad.

The opposition accuses the government of deliberately stoking sectarian tensions and of unleashing mainly Alawite militia in a bid to drive out Sunnis.

The Britain-based Syrian Observatory for Human Rights reported the killing of a total of 11 civilians in Harbnafsa, including five children, in violence on Sunday and Monday.

It is impossible to independently verify death tolls out of Syria. The United Nations has stopped giving figures.