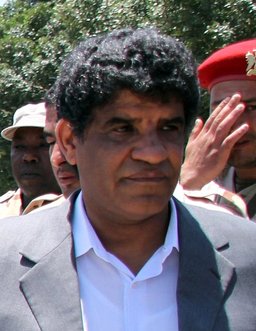 "Senussi has problems with Mauritania's judiciary and has to face court for entering Mauritania under a false identity," President Mohamed Ould Abdel Aziz said overnight during a local forum in the town of Atar.

"The passport Senussi used to enter Mauritania was not falsified but it presents him as Malian and under a fake name, which is why he must undergo trial in Mauritania," Abdel Aziz said.

Libya's new authorities last month dispatched Prime Minister Abdel Rahim al-Kib to Nouakchott to press for the extradition of Senussi, who is also wanted by the International Criminal Court in The Hague.

Senussi, the feared former right hand man of slain Libyan dictator Gadhafi, was arrested in Mauritania in March and charged two months later for illegal entry and use of forged documents.

"This situation has been explained to the Libyan delegations who came to request extradition, as well as to France," where Senussi has been sentenced to life over the 1989 shooting down of a UTA airliner over the Tenere desert.

The plane was carrying 170 people from Brazzaville to Paris via N'Djamena.

The International Criminal Court in June 2011 issued a warrant for Senussi, calling him an "indirect perpetrator of crimes against humanity, of murder and persecution based on political grounds" in the eastern Libyan city of Benghazi.

Benghazi was the birthplace of a revolt that started in February 2011 and eventually put an end to more than four decades of dictatorship in Libya, leading to the slaying of Gadhafi and the arrest of several of his allies.