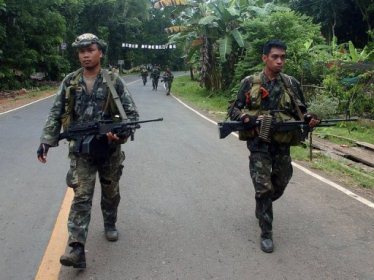 A civilian died in crossfire, while the army said the bodies of two Bangsamoro Islamic Freedom Fighters (BIFF) had been recovered hours after the attacks in Maguindanao province.

The rebels used chainsaws to bring down electricity pylons before dawn, plunging several towns into darkness, and then opened fire on army detachments, police and the military said.

"Sporadic heavy fighting continued in the morning, but we set up roadblocks while the military went after the rebels," provincial police chief Senior Superintendent Marcelo Pintac told AFP.

"They used chainsaws to sabotage the power lines. Heavy fighting is ongoing," he added.

He said the rebels were also believed to have planted improvised bombs along a major highway that runs through the strife-torn province of Maguindanao, where the fighting erupted.

At least six armored vehicles were seen rolling down the highway as attack helicopters flew overhead, while explosions and machine-gun fire echoed in the distance.

Provincial governor Esmael Mangudadatu said "hundreds" of villagers were believed to have fled their homes as government forces repelled the rebels.

"They sabotaged power lines and attacked 11 towns. We are now largely in control except for a section of the highway that remains closed," he said.

The governor said he was asking the rebel fighters to call a truce but advised commuters to avoid the area.

Umbrakato has boasted of having about 5,000 armed fighters, though military officials believe he only has a few hundred under his command.

"This act of aggression... is meant to derail the peace process," Deles said in a statement, as she sought to assure the public the violence would not affect a new round of talks set to resume in Malaysia this week.

Umbrakato had previously accused his former comrades of betraying the rebellion's ultimate goal of an independent Islamic state in the troubled south.

The Muslim insurgency on the island of Mindanao began in the early 1970s and the fighting has killed some 150,000 people, miring large parts of the south in deep poverty.

Abu Misri, a spokesman for Umbrakato, told AFP by phone that the attack was launched to avenge the alleged unprovoked killing of a BIFF member by troops in June.

He said his men were under instructions not to stand down, despite rebel positions being pounded by helicopter gunships.

"We are not harming civilians. But we are prepared to die," he said.